What If You Only Took 4 Trades a Month? 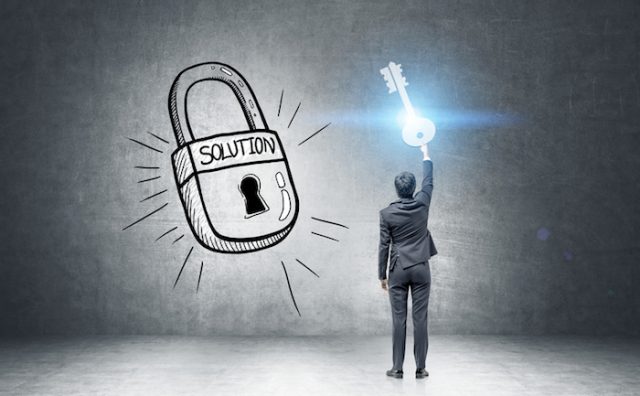 How many trades did you take last month? 4? 40? 400? The answer will tell me a lot about you and how you’re doing in the market. There’s an extremely high correlation between trade frequency or number of trades taken per month and one’s trading equity curve.

Today’s lesson, whilst using hypothetical examples, is very, very real in its theory and the concepts taught. I am going to show you my trading style and take you through a mock example 3-month trading routine that looks very similar to my personal trading routine on a month-to-month bias. I am going to show you how I trade, how I think, how often I trade, planning risk / reward and more. So, let’s get this party started…

The 4-trade per month trading routine…

My entire trading philosophy as well as my life’s philosophy is that less is usually more, simple is better, I consider myself a minimalist especially regarding trading. There are some very good reasons why I do this. I have discovered over time and through much experience that the more you push and try to ‘force’ money out of the market, they less you will make.

What this means, is that I prefer to take a low-frequency trading approach because the reality is that it’s what works. Traders who trade a lot or who day-trade tend to rack up the costs in spreads / commissions as well as in losing trades. Not to mention, there is a very real mental cost that comes with trading a lot, it’s incredibly mentally stressful and draining, which has a physical cost on you as well as relationship costs on your friends and family.

You need to understand that:

Once you understand the two above points, it will begin to change how you think about trading. Consider that with a strike-rate of just 50% you can put your trading account WELL into the black (profitable). How is this done, you ask? With risk-reward; by making sure your risk-reward is averaging about 2 to 1 (reward 2 times risk). The power of risk reward is often poorly understood and under-utilized by most traders, as a result, they lose money. When you are not taking advantage of risk-reward, you must win a very high percentage of your trades to be profitable, and that is a very hard thing to do.

Now, let’s look at a mock / hypothetical set of 3 months of my trading routine. These aren’t actual trades I took, but the charts you see ARE good examples of high-probability price action signals that I teach in my courses and that you can and should learn how to trade. Some of the trades in the spreadsheets (the losers) are totally made up and just there for example’s sake.

Here are the results of Month 1:

You will notice in the spreadsheet below that 4 trades were taken in approximately one month of time. Notice that there were 2 losing trades and 2 winners, but the winners were both 2R, meaning 2 times risk, so a 2 to 1 risk reward. The result was a positive 2R profit. So, if you were risking say $500 per trade, you would have made $1000 in profit for this month, not bad for only entering 4 trades which would require VERY little time investment on your part.

The first winner in the above spreadsheet was a nice pin bar sell signal at a key resistance level, as seen below. This trade went on to make 2R. Notice however, it took 2 to 3 weeks to play out from entry to exit. You must have patience to trade this way, that’s why I always say patience is what makes you money in trading. Most traders were jumping in and out of the market during these 2 to 3 weeks, losing money and chewing up their accounts with spread fees, losing sleep and generally just getting frustrated and angry. Not you! You’re trading the 4-trade per month method! 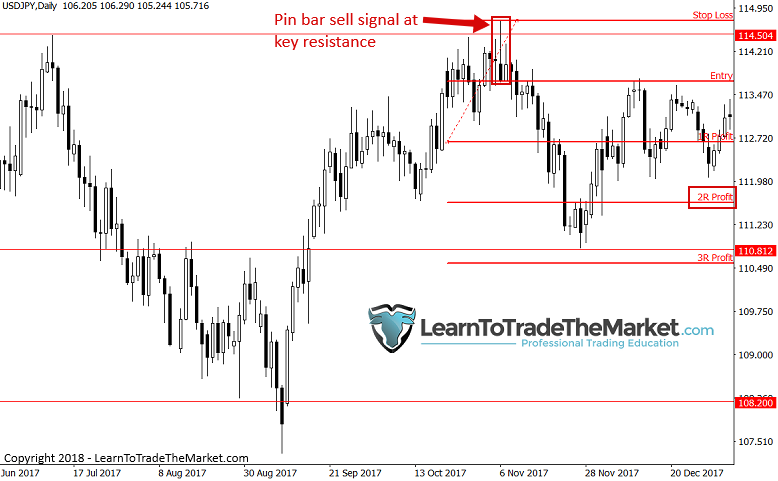 The second winner was also a nice 2R profit. Starting from a bullish tailed reversal bar that formed after a pull back to support, as seen in the chart below. 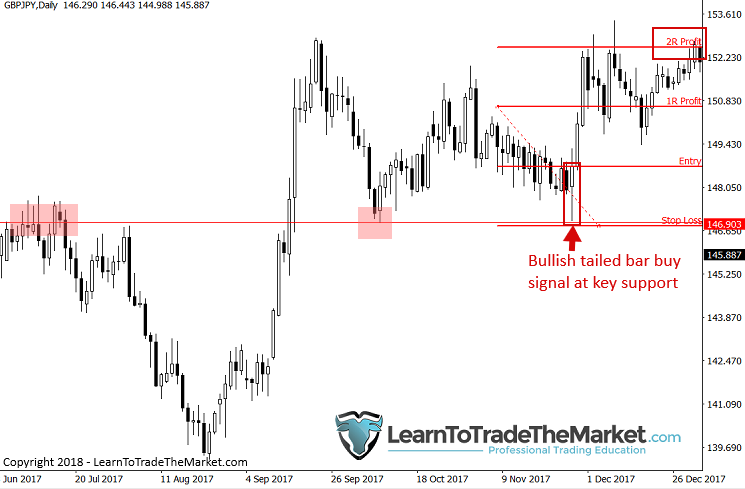 Keep in mind, this is hypothetical. A skilled price action trader could easily win more than 50% of their trades some months. I am trying to show you that even with a low strike-rate (even below 50%) with proper risk-reward, you can still make good money. Traders get into trouble by entering stupid trades and thus taking stupid losses that were unnecessary, risking too much and then losing too much and just generally deviating from their trading plans.

Here are the results of Month 2:

You will notice in the spreadsheet below that 4 trades were taken in approximately one month of time. Notice that there were 2 losing trades and 2 winners, but the winners 3R and 1R, meaning 3 times risk and 1times risk. The result was a positive 2R profit. So, if you were risking say $500 per trade, you would have made $1000 in profit for this month, not bad for only entering 4 trades which would require VERY little time investment on your part.

The first winning trade of this month period was an interesting fakey pattern that formed on the daily chart of the S&P500 within the recent runaway trend this market was in just before all the recent volatility set in. you will notice we netted a 3R winner here and could have netted a 4 or 5R winner. Getting one big winner like this a month, if you’re trading a very minimal amount of trades like I do, can literally pay for MONTHS of losing trades and put you into the black. Are you starting to see why I love this style of trading so much? You could be out doing anything during this trade’s lifespan; you don’t have to sit in front of your screen worrying, you just set and forget your trades… 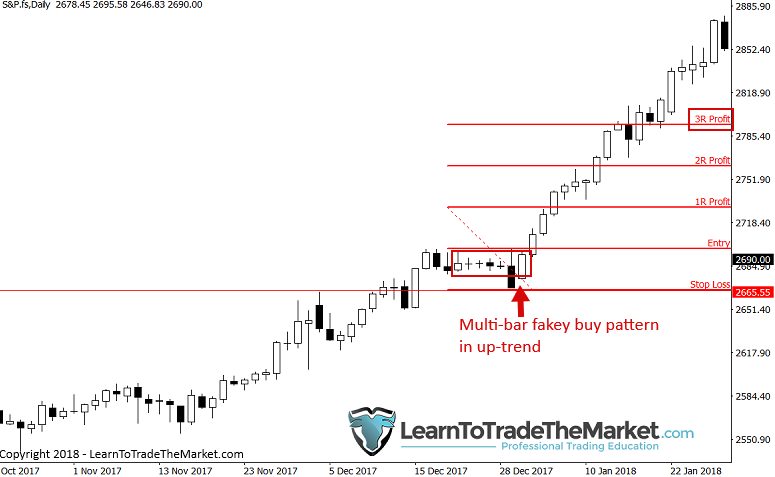 The next winning trade in this month period was an inside bar breakout play. Notice, this was only a 1R profit with the reason being, there was a key resistance level coming into play before 2R would have been hit, so logic would dictate we exit ahead of the key level rather than hoping and praying price breaks through it. It’s OK to take 1R profits sometimes if it makes sense, just don’t make it a regular occurrence or else you will have to win a much higher percentage of trades to make money. 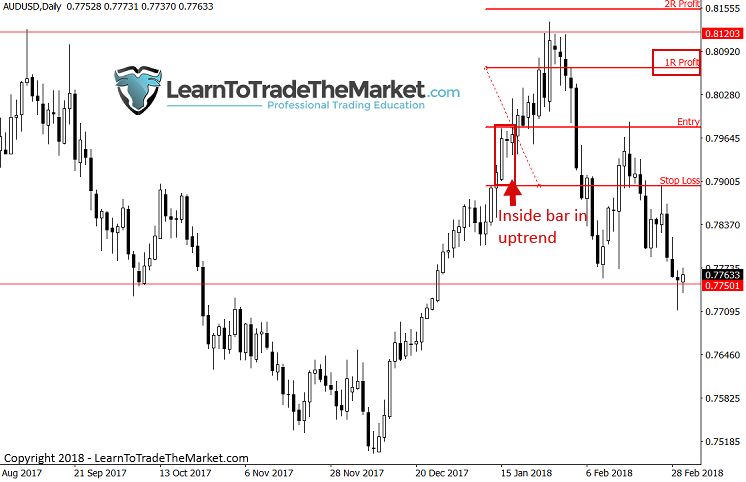 Here are the results of Month 3:

You will notice in the spreadsheet below that 4 trades were taken in approximately one month of time. Notice that there were 2 losing trades and 2 winners, but the winners were both 2R meaning 2 times risk, for a total of 4R profit. The result was a positive 2R profit after you subtract out the two 2 1R losers. So, if you were risking say $500 per trade, you would have made $1000 in profit for this month, not bad for only entering 4 trades which would require VERY little time investment on your part.

The first winner in this group was an obvious pin bar buy signal on Gold which formed at an event area that we discussed extensively in our daily trade setups newsletter as a buy zone before that pin formed. This was a quick turn around on this trade, netting a 2R winner only 4 days after entry. 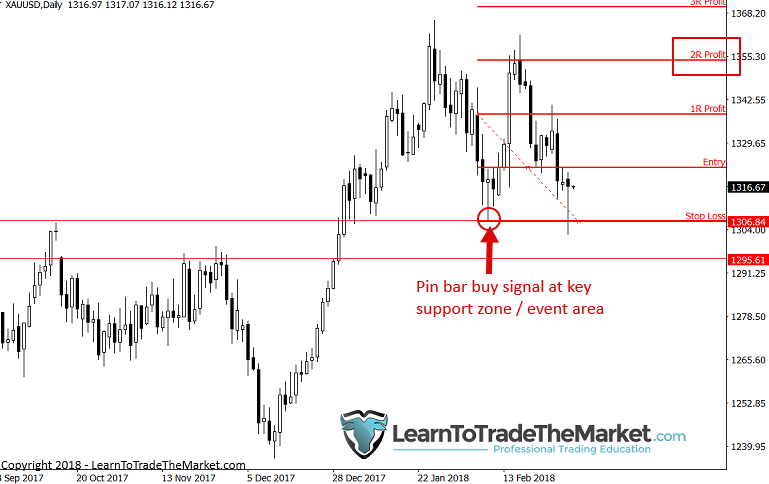 The second winner in this group was a bit of a cheeky one; an inside bar sell signal at a key resistance level. Normally, I like inside bars as trend-continuation breakout plays, but in certain situations they can be used counter-trend, something I explain much more in-depth in my price action trading course. Notice that we had a nice 2R profit off this setup that ended in a bullish pin bar from support as of last Friday which may well lead to a buying opportunity (See our daily members commentary for updates on this). 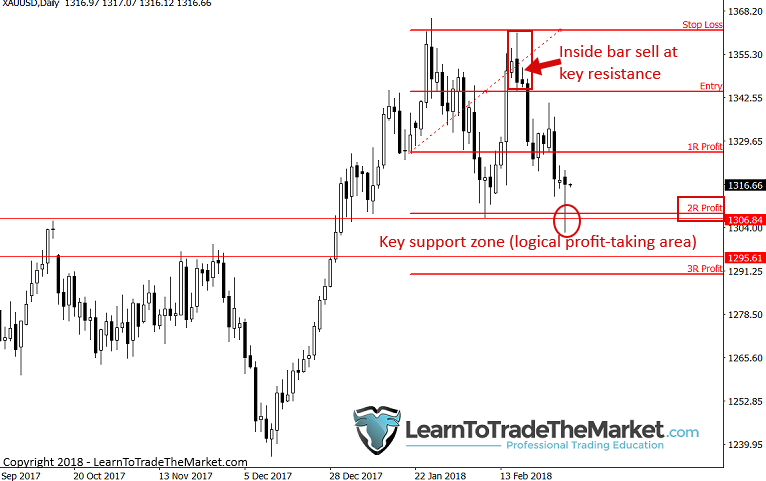 Key points to bring it all together:

The end results of taking just 4 trades per month over 3 different one-month periods: 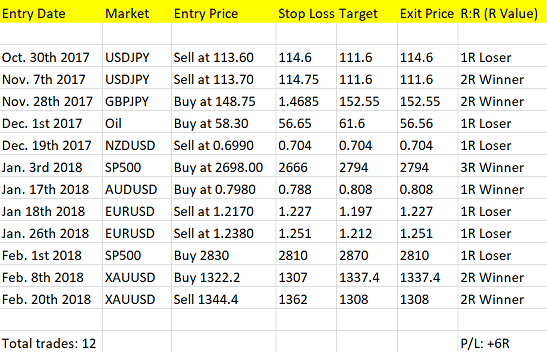 I want you to promise yourself you will try this starting tomorrow: You will COMMIT to taking JUST 4 trades per month. Try it. Leave me a comment below with your promise to commit to this experiment, then after a month, contact me here and let me know your results. I firmly believe that if you follow-through with this, you’re not only going to see your trading results improve, you’re also going to be awakened to an entirely different trading mindset, something that I hope will completely change the direction of your trading career.

Now, just imagine if you combine the simple trading approach I outlined here today with the ability to find high-probability price action entry signals, place strategic stop losses, profit targets, manage your money properly and stay cool, calm and collected (like I teach my students). Once you learn how to bring all this together you should be unstoppable, far less stressed, hopefully more profitable, and most of all, living a happier, healthier lifestyle.

What did you think of this lesson? Please share it with us in the comments below!