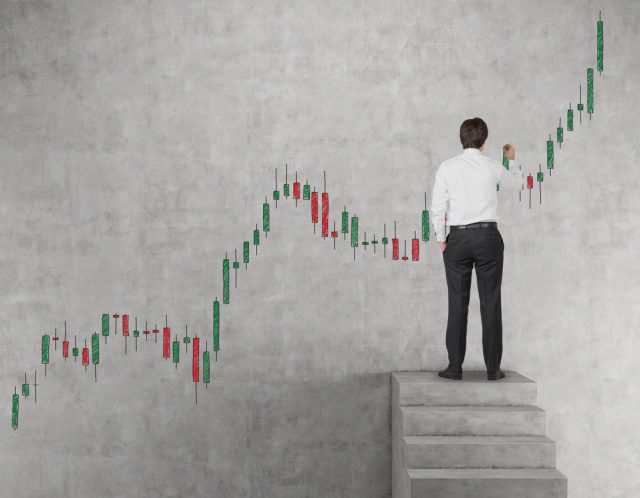 Two of the primary features of any price chart that are critical components for any price action trader to thoroughly understand, are support & resistance levels and price action event zones.

You are probably more familiar with “support and resistance levels” since they are one of the more basic technical analysis concepts and are pretty easy to understand.

However, price action event zones (also called event areas) are something I came up with years ago and so they may be a bit less familiar to you. But, they are equally as important as standard support & resistance areas, if not more.

In today’s lesson, I wanted to take some time to teach you about both of these pieces of the technical analysis ‘puzzle’ as well as assist you in differentiating between the two.

An elephant never forgets, neither does the market…

Elephants are said to have one of the best memories in the animal kingdom. The market, also has an amazing ‘memory’ in that major turning points on a price chart tend to carve out levels and zones that remain relevant for months and years into the future.

How many times have you seen a market turn, virtually on a ‘dime’, and then you zoom the chart out and see that same level was also a major turning point multiple years ago? THESE are the types of price action ‘footprints’ that we NEED to learn to follow and utilize.

Whilst I have written an article about event areas before, titled The Market Never Forgets, I want to reiterate exactly what these important areas on the chart are…

An event area (or zone) is a significant horizontal area on chart where an obvious price action signal formed OR from which a massive directional (up or down) move initiated (such as a massive sideways trading range breakout, for example). You can and should think of these event zones as a “hot spots” on the chart; a significant / important area on a chart that we should continue watching carefully as price retraces back to it in the future. We have an expectation that next time / if price re-visits these event zones, the market will AT LEAST pause and ‘think’ about whether or not it will reverse direction there.

As discussed above, a price action event area will remain relevant well after it forms. If a market comes back and re-tests these areas, they provide a “hot spot” and a good opportunity-area to look for a second chance trade entry. So, don’t worry if you missed the original move from the event area, there is usually another opportunity at an event zone and the market will be there tomorrow, don’t forget!

Large and significant events / moves on the price charts are remembered and other professional traders know this. These past event zones often become self-fulfilling turning points simply because so many other traders expect price to turn there and are already waiting to buy or sell at them.

Let’s look at some example charts…

Perhaps the easiest way to understand a “price action event area” is by a clear and unmistakable event, such as a pin bar signal. If an obvious price action signal forms and price follows-through in agreement with the signal, making a strong move, you now have an event area at the level / area of the signal’s formation.

An important point to remember about this is that if you miss the original event move, don’t worry! You can often get a second chance entry by simply waiting for price to retrace back to that same event area. You don’t even need a price action confirmation signal on the retrace either, you can enter blindly at an existing event area. However, if you do get another clear price action signal on the retrace, as in the example chart below, it’s even better!

The event area seen below through 1305.00 in Gold, was solidified by both a signal and a breakout. Notice the first pin bar signal on the chart just above that level, then price eventually broke down through 1305.00, breaking out, further hammer-home that this level was a strong event level. 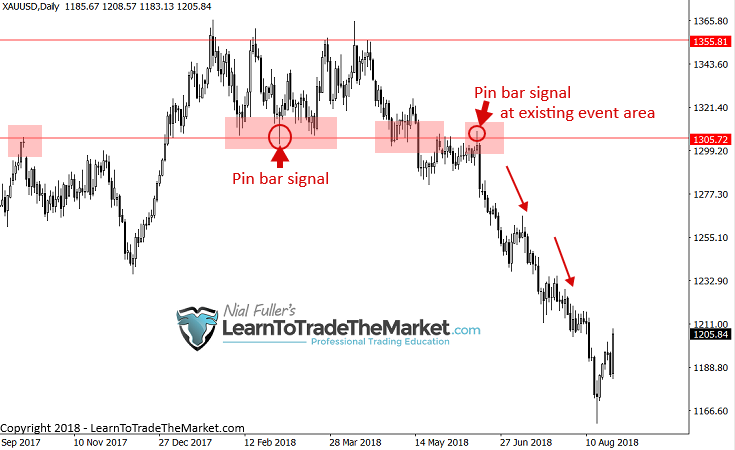 In the next event area example, we are looking at the S&P 500 daily chart. Notice that after a powerful down-move, a couple of long-tailed bullish reversal bars formed in early February, leading to a powerful up-move. The event-zone was forged at that point. We now can watch that area as a “hotspot” on the chart to watch when price pulls back to it again.

Notice the pin bar buy signal that formed after a pull back to that event zone. This was a near picture-perfect buy signal because we had the confluence of the event-zone as well as a well-defined signal. 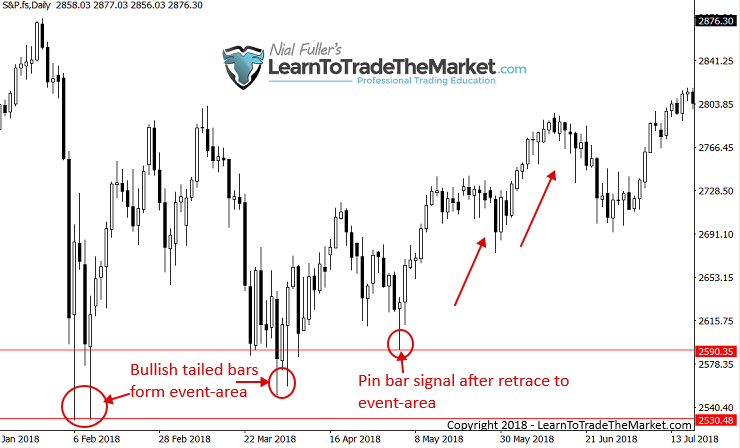 In the example below, notice there is not obvious price action signal and no strong breakout from consolidation or a level. These levels are just standard support and resistance levels being drawn in across bar highs and lows. 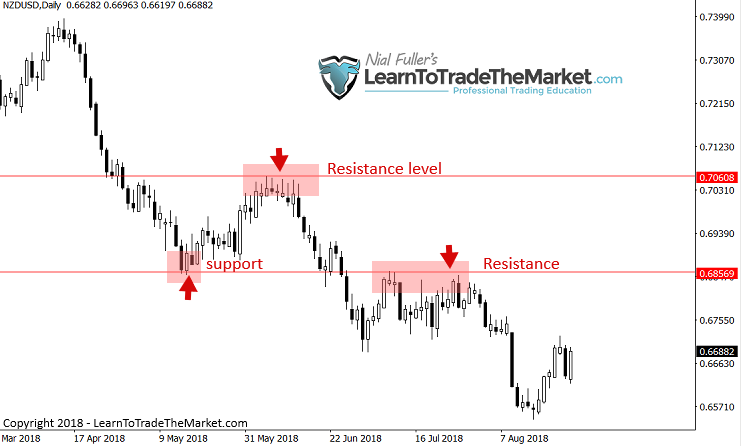 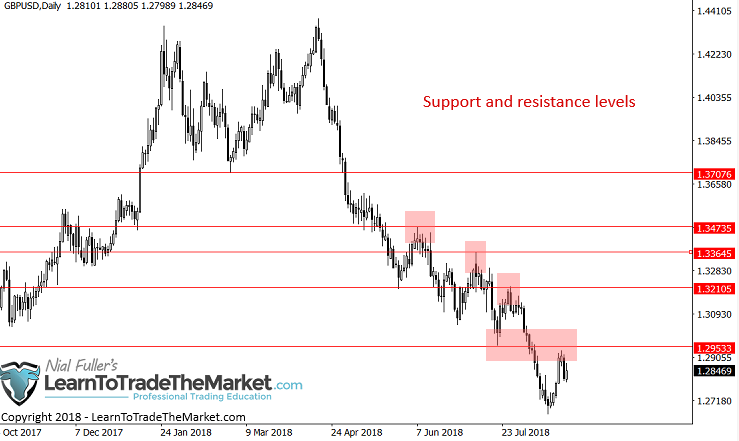 What are the main differences between the two?

The difference between an event zone and standard support and resistance level or area can seem quite subtle, but there is a distinction.

Here’s how you can differentiate the two…

An event zone has to either have a price action signal that led to a big move OR a major price breakout from a consolidation area or level. Let’s look at some chart examples to show this more clearly: 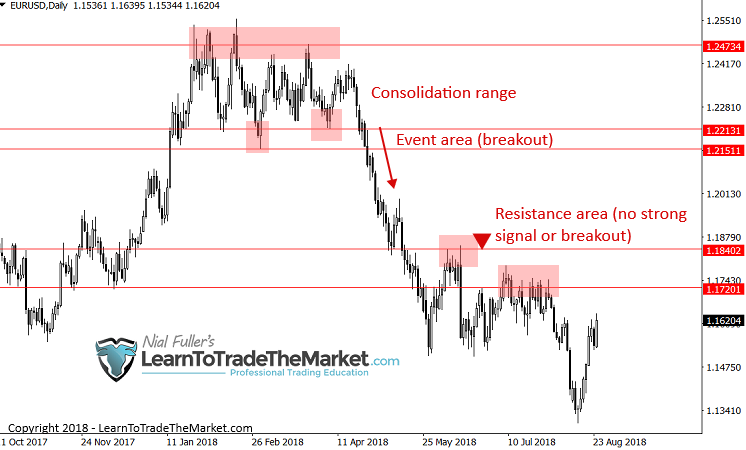 Next, we see a clear example of support and resistance levels drawn on a chart. These are not event areas because: 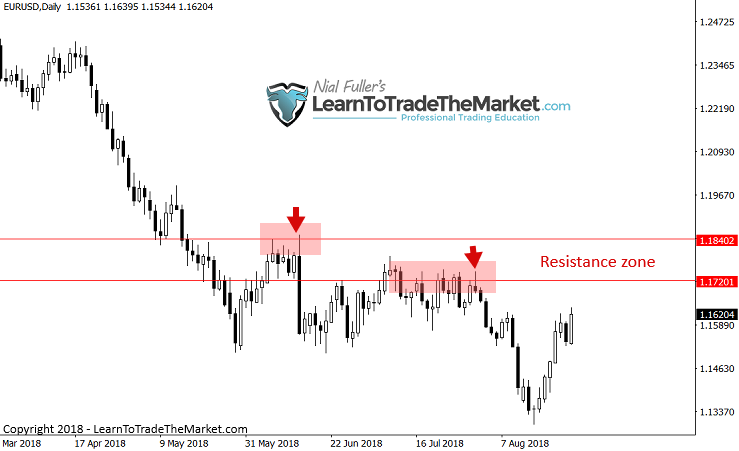 Another important feature and benefit of event zones and support and resistance levels is that they help us define our risk on a trade. More specifically, they help us determine where to place our stop losses and how to know when the market has invalidated our trade idea.

You can obviously place a stop loss just beyond a support or resistance level, because if price violates that level, the thinking is that the market is changing and your original trade idea is now unlikely to work.

An event zone is often a more significant support / resistance area so it’s an even better barometer of trade risk than a standard level. If a market breaks past an event zone, you KNOW your trade idea is not working and market sentiment is severely shifting.

If you have a clear price action signal / pattern at an event zone, you can fine-tune your risk even more, because these signals are often very-high probability and hence we can place our stop loss at the high or low of the signal and often we can then enter on a retrace of the signal, on what I call a trade entry trick, which allows for huge potential risk reward trades: 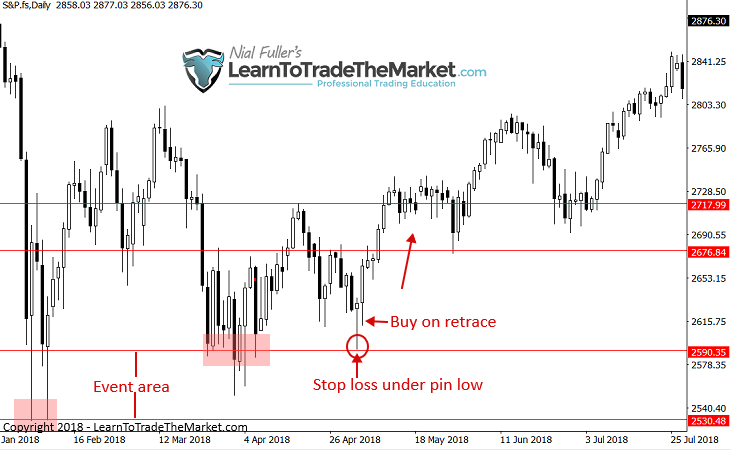 Becoming a proficient price action trader is all about learning to skillfully interpret and properly utilize the footprint of money on the chart, this footprint is left behind as the price action plays out over time.

There are various ‘tools’ in a price action traders toolbox and the tools that I teach in my professional trading courses are (obviously) what I feel are the most important ones. Price action event zones as well as standard support and resistance levels are just as important as learning individual price action signals and patterns. Event zones and support and resistance levels play the critical role of helping you to understand the overall chart context and market dynamics that a particular trade has formed within. It is THIS interplay between the actual trade signal / entry itself and the overall market conditions it forms within, that constitutes a high-probability trading opportunity. Not simply “Oh, there’s a pin bar, I will trade it”.

It can take years of screen time and experience to fine-tune your ability to understand and properly trade with all the different pieces of the price action “puzzle”. However, learning from tutorials like this one as well as getting a more structured price action trading education will go a long way in reducing the learning curve and shortening the time required to become a master price action trader.

I REALLY WANT TO HEAR YOUR FEEDBACK IN THE COMMENTS BELOW :)