Inside bars are one of my favorite price action setups to trade with; they are a high-probability trading strategy that provides traders with a good risk reward ratio since they typically require smaller stop losses than other setups. I like to trade inside bars on the daily chart time frame and ideally in strong trending markets, as I have found over the years that inside bars are best in trending markets as breakout plays in the direction of the trend. However, they can indeed also be used as reversal signals from key chart levels, we will discuss both in this tutorial. Let’s discuss some facts about inside bars first and then I will go over some examples of how I like to trade them.

What is an inside bar?

An inside bar is a bar (or a series of bars) that is completely contained within the range of the preceding bar, also known as the “mother bar”. The inside bar should have a higher low and lower high than the mother bar (some traders use a more lenient definition of inside bars to include equal bars). On a smaller time frame such as a 1 hour chart, a daily chart inside bar will sometimes look like a triangle pattern. 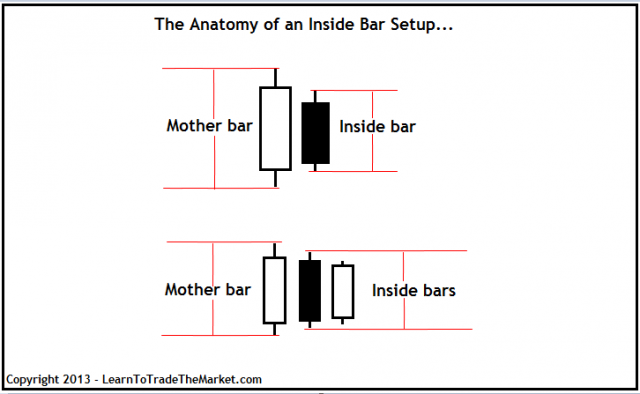 What does an inside bar mean?

The inside bar forex trading strategy is a ‘flashing light’, a major signal to the trader that reversal or continuation is about to occur.

An inside bar indicates a time of indecision or consolidation. Inside bars typically occur as a market consolidates after making a large directional move, they can also occur at turning points in a market and at key decision points like major support/resistance levels.

They often provide a low-risk place to enter a trade or a logical exit point. In the image you will see next, we see an example of inside bars that formed as a continuation signals and then one that formed as a turning point signal. While they can be used in both scenarios, inside bars as continuation signals are more reliable and easier for beginning traders to learn. Turning-point, or inside bar reversal signals, are best to leave alone until you have some solid experience under your belt as a forex price action trader.

How to trade the inside bar setup

There are basically two ways to trade an inside bar setup: As a continuation signal or as a reversal signal.

First, you will see that we have inside bars that acted as continuation signals, that is they resulted in a continuation of the previous momentum before their formation. These continuation inside bars often result in nice breakouts in-line with the current trend and near-term momentum.

We can also see a good example of an inside bar that acted as a reversal or turning point signal. Note on the far right side of the chart an inside bar formed at a key support level, the market then broke back the other direction and made a nice move higher from the inside bar / stalling pattern that formed at a previous level of key support. 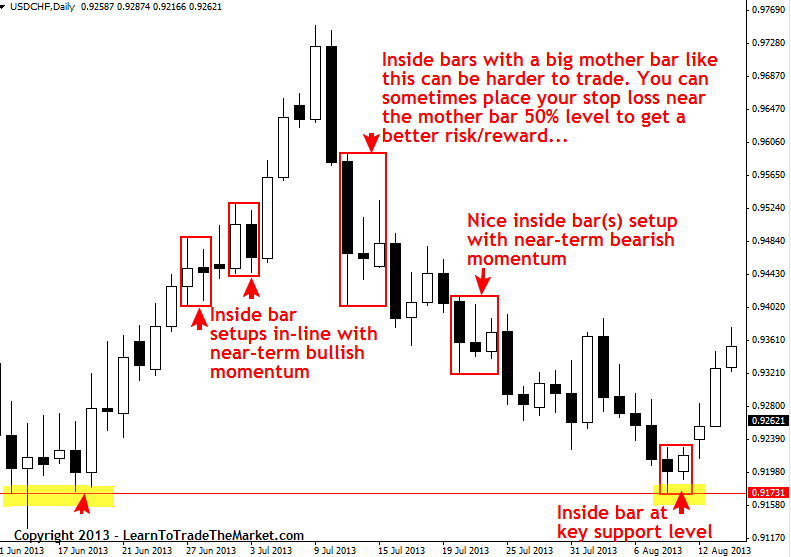 Important note: There are basically two different stop loss placements for inside bar setups, and you will have to use some discretion in determining the best one for each inside bar you trade.

I prefer smaller and “tighter” inside bars that don’t have really large mother bars…this shows more ‘compression’ and thus a stronger potential breakout from that compression. If you are a beginner or struggling trader, I suggest you avoid inside bars with big mother bars for now, see the previous example chart above for an example of an inside bar with a big mother bar.

Inside bars as continuation signals

The most logical time to use an inside bar is when a strong trend is in progress or the market has clearly been moving in one direction and then decides to pause for a short time.

In the chart example below, we can see a few examples of inside bar setups on the daily EURUSD chart that worked out quite nicely. They were in-line with the near-term dominant daily chart trend and resulted in nice breakout continuation plays… 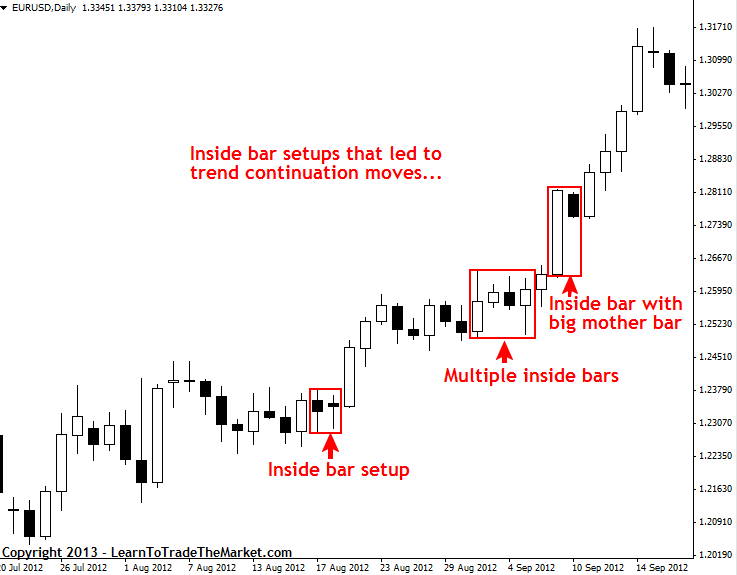 Inside bars as reversal signals

You can sometimes trade inside bars as reversal signals from key chart levels. Please note that this should ONLY be tried after you have successfully mastered trading inside bars in-line with the daily chart trend as continuation / breakout plays, as we discussed above.

In the chart below, we can see an example of a good inside bar reversal signal. Of critical importance here, is that the inside bar formed at a key chart level, indicating the market was hesitating and “unsure” if it wanted to move any higher. We can see a decent downside move occurred as price broke down past the inside bar’s mother bar low.. 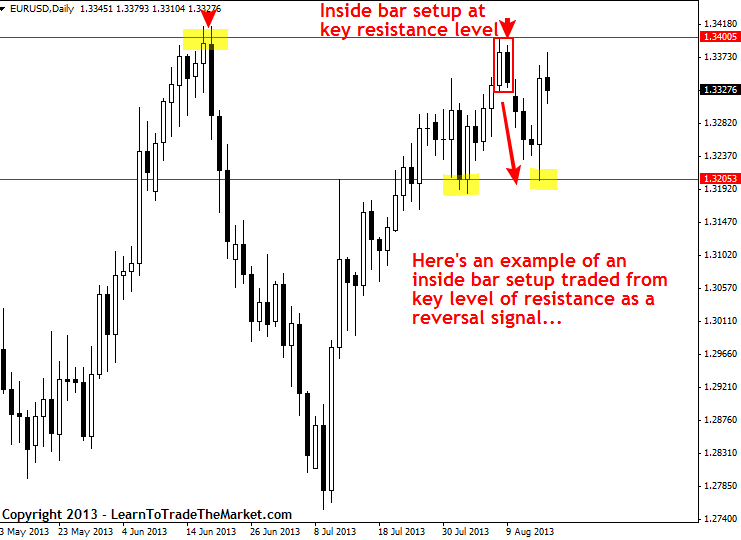 The best time frame for trading inside bars

I get a lot of emails about inside bars, and many traders try in vain to trade them on lower time frame charts, and it really is just a huge waste of time. Once you gain experience, you MIGHT be able to trade inside bars on a 4 hour chart time frame, but that is the LOWEST time frame I would ever consider trading an inside bar on. The daily chart is the best for inside bars, and even the weekly chart can sometimes yield some very lucrative inside bar setups.

Inside bars can be used when trading a trend on the 240 minute charts or the daily forex charts, but I personally prefer to trade inside bars on the daily charts and I recommend all beginning traders should stick to the daily charts until they have fully mastered and found consistent success with the inside bar setup on that time frame.

In the chart example below, note how well the inside bars highlighted worked out. They won’t all work out obviously, but inside bars on the daily chart have a much higher probability of bringing you a profit than an inside bar on a lower time frame… 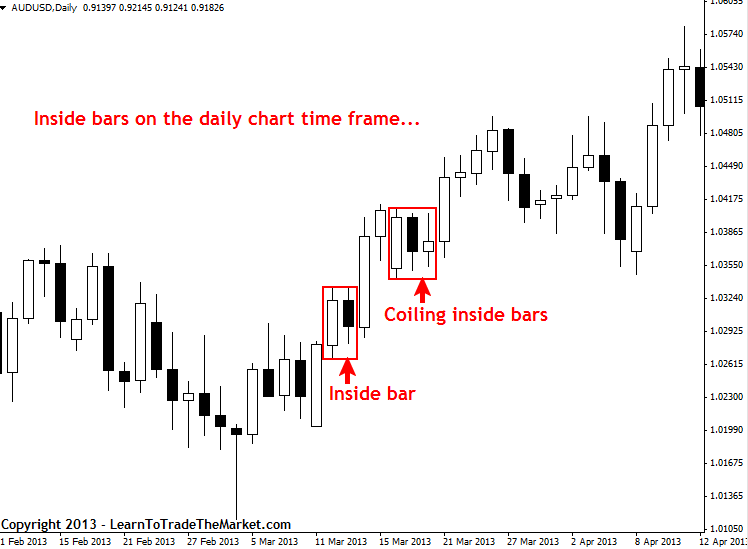 The chart example below shows a recent 1 hour chart of the EURJPY. If you look closely you will see A LOT of inside bars that failed, this is a prime example of why I avoid trading inside bars on the 1 hour chart and also why I LOVE to trade them on the daily chart time frame… 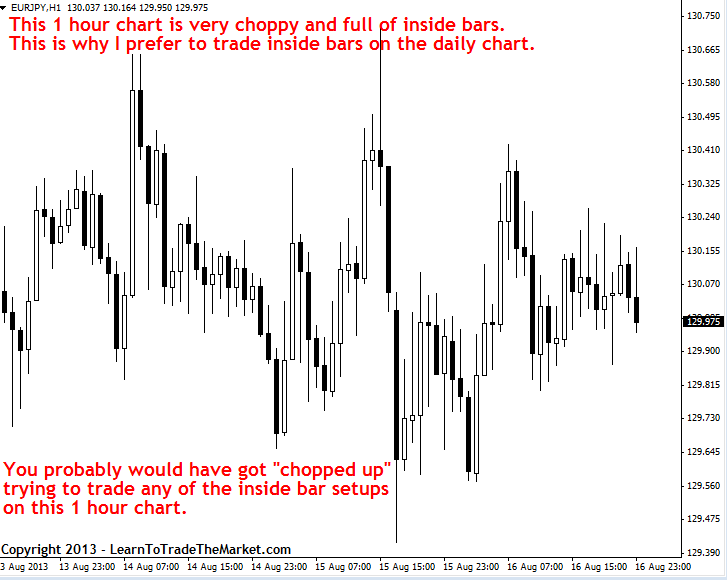 Finally, here is a video of a past live trade using the Inside Bar Strategy: