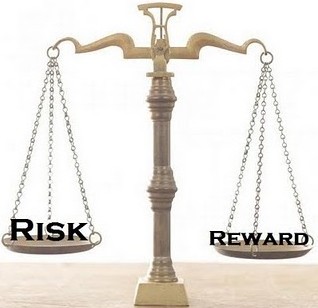 If you were stranded on a desert island and somehow had access to the internet, a computer, and electricity, and you could only have one Forex trading educational article to read, this would be the article you would want to have…

A simple fact of Forex trading is that it is a game of probabilities, those traders who learn to view and think about trade setups in terms of risk to reward, are the ones who usually end up making consistent money in the Forex market. There is something to be said for developing your discretionary trading skills, as having a sharpened sense for spotting well defined trade setups at the right place and time is definitely a necessary ingredient to successful trading. However, it is possible to make consistent money even if your discretionary trade setup identification skills are not fully matured yet. Risk to reward setups are what give all traders an equal chance at making consistent money, a thorough understanding of risk to reward and how to view trade setups in terms of possible risk to possible reward, is the closest thing to the “holy grail” of trading, and is one of the most important pieces of the puzzle to consistently profitable trading, second only to having the proper amount of self-discipline and emotional control.

The first thing that all traders should do upon spotting a price action setup, or any trade setup, is calculate the risk they will have to take on in order to give the setup a realistic chance at working out. Traders often make one or two mistakes when it comes to determining risk; they either define the reward first, which is a mistake born out of greed, or they put a stop loss on the setup that is much too close to the entry to give the trade a chance at working out.

When learning to think in probabilities and to view the market in terms of risk to reward, it is necessary to calculate the risk on a trade setup first, then you can calculate the reward as a multiple of the amount you have at risk. By concentrating on the risk first, instead of the reward, you are making yourself more aware of the risk involved on each trade setup, instead of becoming fixated on how big of a reward you might make, as many traders do. This will also turn you into a “risk manager”, rather than a “trader”, the best traders in the world know that consistent trading profits come as a result of managing risk effectively, so consider yourself a manager of risk from now on.

Examples of how to draw risk / reward levels:

First, we identify a high-quality price action trading setup, in the chart below we are looking at the 1hr chart of the EURUSD from this week. A quality 1hr pin bar sell signal formed at a confluent intra-day resistance level and in the direction of the bearish momentum on the daily chart.

Next, we mark our risk level for this setup, in this case the risk is the distance from the low to the high of the pin bar, so we place a stop loss at 1.3656, one pip above the high, the entry is a break of the low, so 1.3611 is our entry level, one pip below the low. The total risk distance for this setup is 45 pips, we will figure 1$ per pip for the examples in this article, so our risk is $45, not 45 pips. Since you can trade various numbers of lots per pip, your actual risk is not calculated in pips, but in dollars, many traders make this mistake. Remember; always calculate your risk and reward in dollars, not in pips, only use pips to mark the risk and reward levels on your charts. (we expanded on this in this in our forex money management article here )

Now we can use this measure of 45 pips to mark our 1, 2, and 3 times risk multiples. Since our risk (R) is $45, our 1R multiple is $45, or 2R multiple is $90, and our 3R multiple is $135. Since our stop loss distance is 45 pips, we subtract the 1, 2, and 3 multiples of 45 from our entry point of 1.3611; we then get the levels marked on the chart below. This setup obviously worked out quite nicely as all three risk multiples got hit, for a reward of 1 to 3. It is worth noting that trade setups on the smaller time frames are more likely to hit larger risk multiples since your stop loss will usually be tighter than it will be on a higher time frame. The trade is now set up, time to let the market get to work. 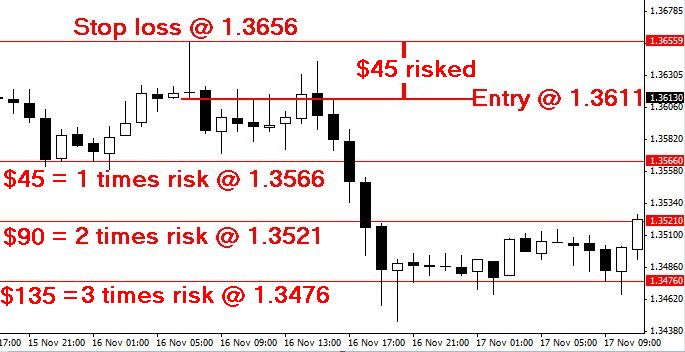 In the chart below we are looking the daily Silver market, we can see a quality pin bar fakey combo setup formed with the dominant bullish market momentum. We first marked our risk distance which was 1.13; we then multiply our risk (1.13) by 1, 2 and 3, to get our (R) risk multiple levels. We can see them drawn in on the chart below and also that this setup easily brought traders a risk / reward of 1 to 3 before forming another very nice pin bar strategy that sent prices lower. This example also figured 1$ per pip, or per smallest incremental price movement on silver, this results in $113 risked. 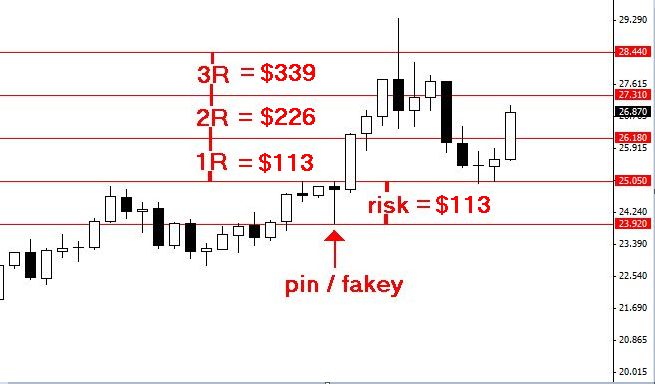 If you decide that you want to try and let a particular trade setup run, you might want to employ a trailing stop strategy with the aid of risk / reward levels. The best way to do this is to mark your risk and reward levels just as described above, but instead of actually entering an order for your reward levels, you leave the trade open, meaning you don’t have a set exit at your pre-defined reward levels. Instead, once the market moves in your favor, you use your pre-defined reward levels to trail your stop loss to, thus leaving the trade open and giving yourself a shot at greater profits, while still locking in some profit and lessening risk.

A common technique to use when trailing stops to risk / reward levels is to trail the stop up to your entry level when the trade is up 1 times or 2 times your risk. You can also trail your stop 50% closer to your entry once you are up 1 times risk if you want to leave the trade more “breathing” room. Many traders will simply keep their stop 1R multiple away, meaning if you are up 1 to 2, you trail your stop up to lock on 1 times your risk, if the market than moves 1 to 3 you trail your stop up to lock in 2 times your risk. This is a solid trailing technique because you are securing profits while at the same time leaving the trade open for a possibility at it running further in your favor. This technique is best used in strong trends. Many traders make the mistake when trailing stops of not properly locking in profits, there is nothing worse than letting a winning trade come all the way back to your entry point because you didn’t lock in 1 or 2 times your risk.

The daily AUDUSD chart below shows an inside bar setup that occurred back in mid-September of this year when the AUDUSD was in the midst of an uptrend. In this example you could have moved your stop to break-even once you were up $108 or 1 times your risk, once you got up 2 times risk you could have locked in 1 times your risk or $108. It looks like the market hit 0.9600 or 3R and then pulled back into 2R, however it came about 1 pip shy of 3R on its first attempt, so you would not have moved your stop up until it cleared 3R a couple days later. At this point you would have 2R or $216 locked in, at this point you could either let the trade run past 3R or move your stop up to lock in 3R or $324. If you moved up to lock in 3R right away you would have got stopped out at 3R by the pin bar on September 5th, had you not locked in 3R you could have eventually made 4 or 5R. 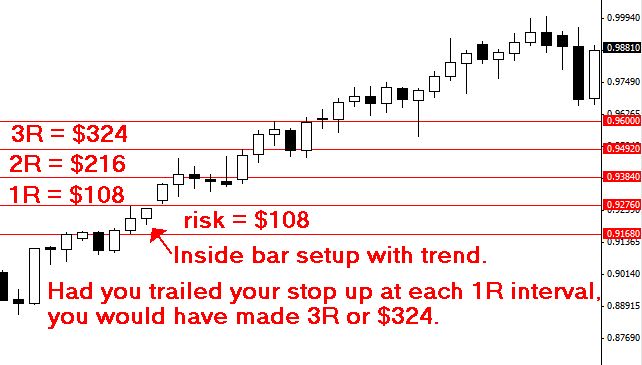 • How risk / reward can make you a consistently profitable forex trader

Ideally, we want to look for trade setups with a risk / reward of at least 1 to 2, by getting a risk / reward of 1 to 2 on every trade setup, we can lose on well over 50% of our trades and STILL make money. This is why risk / reward is the “holy grail” of trading; if you execute it properly you can make consistent money over a period of time. However, many traders mess it up or limit its power by meddling in their trades once they are live, usually this means they take less than a 1 to 2 profit, and then enter another trade that is lower-probability, and maybe take a loss. Once you start this game of meddling with your trades and interfering with the power of risk reward scenarios, you really put limits on what you can achieve as a forex trader.

The lesson to be learned from this article is that you can make still money in the forex markets even if you lose far more trades than you win, IF you understand and properly implement risk to reward scenarios on every single trade you take. You must combine this knowledge of risk to reward with a plethora of self discipline, you must understand that you cannot waver or second guess yourself, if you are trading a solid trading strategy like price action combined with risk reward knowledge and self-discipline, you have the potential to be an unstoppable trader. To learn more about price action trading and risk to reward, check out some of the other cool parts of my website and my price action trading course.

I WOULD LOVE TO HEAR YOUR THOUGHTS, PLEASE LEAVE A COMMENT BELOW :)