Let The Market Take You Out Of Your Trade 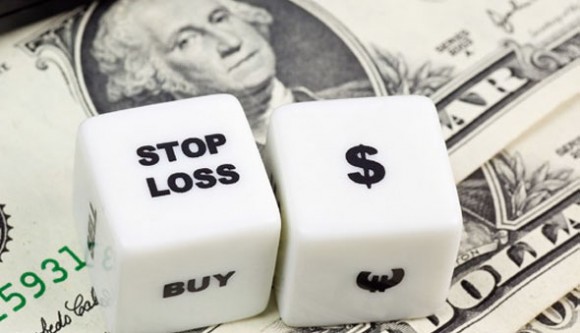 The answer is simple; they don’t self-sabotage on demo accounts, or at least a lot less. On a demo account, you do almost everything right, primarily because there is no emotion because there’s no real money being risked. But from my experience, we can boil that down to an even more specific event; the fact that on a demo account, most traders will simply set and forget their trades, much more so than they will on a live account.

So, what does all this have to do with letting the market take you out? Well, when traders exit trades manually, i.e. before their stop loss or target gets hit, most of the time they are sabotaging their trading and hurting their chances of making money. Most of the time, the right thing to do is to simply let the market take you out, or let price hit your stop loss or your target by itself, without you manually closing the trade.

Why You Should Almost Never Manually Close Trades

Ok, here is the first and perhaps most important thing to understand…

If you manually close a trade when it’s against you, you are voluntarily taking a loss. Read that last sentence again, maybe even a third time. Trading is about maximizing your winners so that they offset your losing trades, that’s how you make money. You’re going to have losing trades, but you don’t need to voluntarily take them, most of the time.

Here is an example: A trader enters a trade on a demo account, it chops sideways for a week, going nowhere. The next week, it rotates down, almost stopping him out for a loss, he’s staring at a $2,500 drawdown. Now, here is the key difference; on a demo account that trader FEELS no reason to close out the trade, so he simply leaves it be. He is thinking logically and clearly and he knows if he closes it he is voluntarily taking a loss that might turn around and become a win. The next week that trade starts moving his way and rockets up to hit his profit target at the week’s end. Rather than taking nearly a $3,000 loss, he booked a $6,000 winner by simply waiting, and doing nothing for two weeks.

The moral of that story is that you must give a trade time to work out. Time is a factor that you can’t control and the one that gives traders the most trouble. Everyone wants to make money NOW, but the market might have other plans. You might have to sit on your hands for two or three weeks, and can you do that on a live account? That is the question and the problem you have to solve if you ever want to make money as a trader.

Examples of letting the market take you out vs. manual exits

Emotions drive traders to exit trades before stop losses or profit targets are hit. The more critical of these two is exiting before a stop loss is hit, or voluntarily taking a loss, because these cost us huge. These trades will often work out just after we manually take the loss…

In the chart below, a trader would have been rewarded for not exiting when price neared their stop loss. In these situations, you must remind yourself this is a game of odds, and you give yourself the best odds by sticking with your initial trade plan and letting the trade play out… 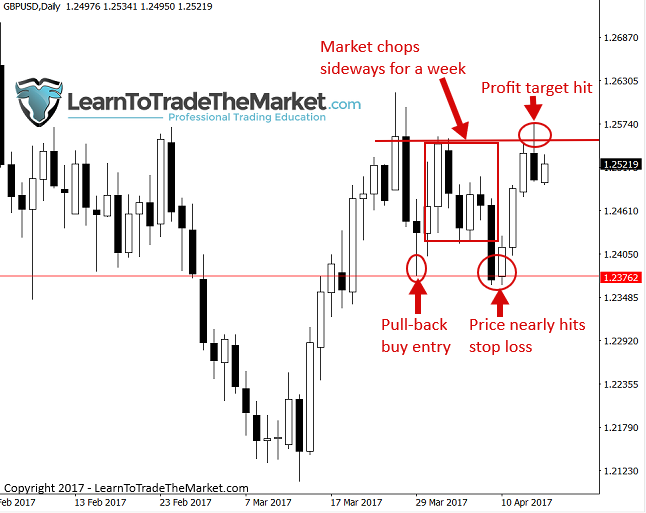 Here is another example of what I call the set and forget mentality with stop losses….

In the chart below, many traders would have exited prematurely after the bearish pin bar formed. But just as they took a loss or a very small win, price was ready to explode higher for a 2 or 3R winner and possibly more. In this case, the horizontal level at 1240.00 was the level to watch, not the pin bar low. Just because there’s a counter-trend pin bar doesn’t mean you need to close the trade, in these situations, I watch key chart levels as indicators of when I should bail on a trade (not only price bars) … 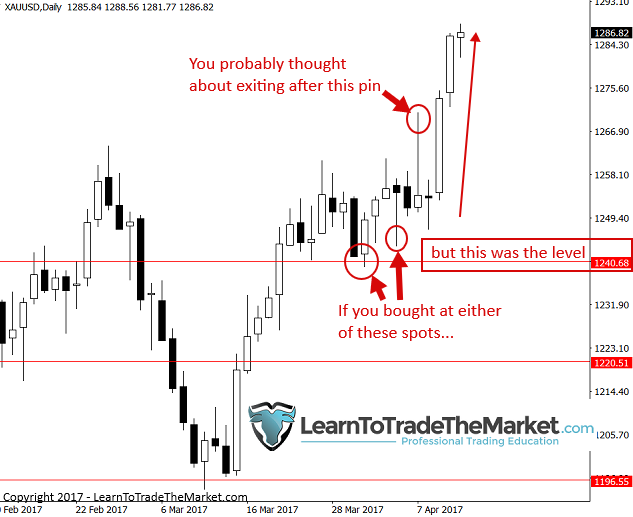 Exceptions to the rule…

Remember, price action trading is not mechanical so there is always an exception to the rules. In this instance, that would be the chart’s price action suggesting a clear reason to exit. There are three scenarios to watch for:

In the chart below, we can see an example of a trade it made sense to exit. If you didn’t have your stop right at the bearish pin bar high, as in if you had entered this bearish pin on a 50% retrace or trade entry trick, you probably would have wanted to close it out before it hit your stop once you saw price pushing up past the high of the pin bar and closing above that key resistance at 51.20 area. There is some discretion involved here obviously. But, you will get better at this stuff through training, time and experience. Typically, if you take a trade against the near-term momentum, which in this case was up, there’s a good chance you will have to exit early… 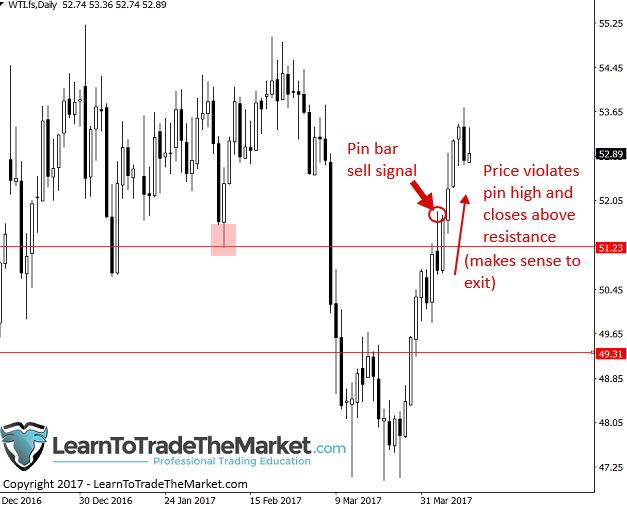 The final example I want to show you is a recent EURUSD pin bar buy signal and how price simply violating it’s low, didn’t mean the trade idea failed.

This setup formed at the key support of a trading range, near 1.0520; a key chart level that had held on numerous recent occasions. Now, remember, key levels are usually more like zones of support or resistance, not always static levels. So, it goes to reason that our stop losses should be beyond them a little bit, not right at the level. Had you entered this pin on my trade entry trick, you should have had your stop well below the pin low (50 to 100 pips). Doing so would have allowed you to avoid a premature stop out when price was just ‘flirting’ with the pin low, right before it surged on in your favor to be a gigantic winning trade. From when this pin bar formed, to when price hit the top of the trading range near 1.0830 area, a month went by. Would you have been able to hold that position in a live account with all the chopping and moving toward your stop loss? If you did, you would have banked a large profit simply by doing nothing… 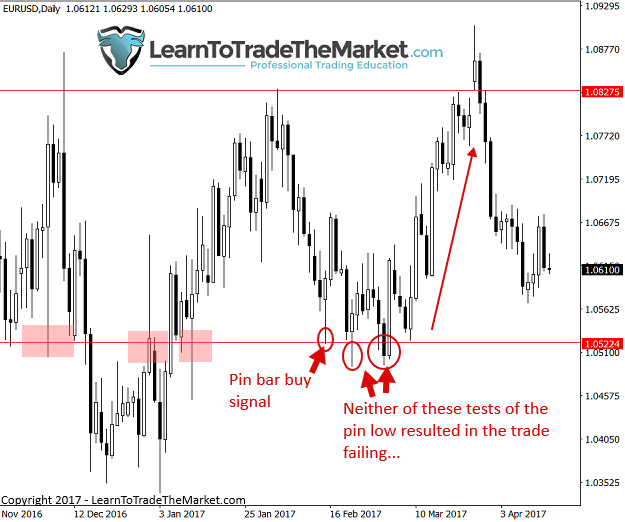 Here are the main take away points of this lesson:

I hope you can see that you can significantly help your trading performance by simply DOING LESS. I mean, simply by fiddling with your trades less often and by not closing them out before they hit your stop loss, you can greatly increase the number and amount of your wins.

Now, I’m not saying you won’t have losses because you will! But, STOP taking them voluntarily and for no reason! So many traders take so many losses that they simply don’t need to take. Maybe it means you have to dial down your risk per trade so you aren’t so emotionally rattled when price rotates toward your stop loss, maybe it means you need to learn more about stop loss placement and how to trade with price action. But, whatever it takes, you must stop losing money simply because you got nervous due to choppy price movement or price moving against you.

Correct stop loss placement, reading what is on the charts correctly and controlling your emotions are all core components to protecting your trading capital and maximising your wins. These are some of the lessons I teach and go more into more in-depth in my trading courses and members’ area. If you are serious about understanding this stuff and how to stop sabotaging your own trading, it’s time to take the next step…