How Long Do Good Trades Take To Play Out ? 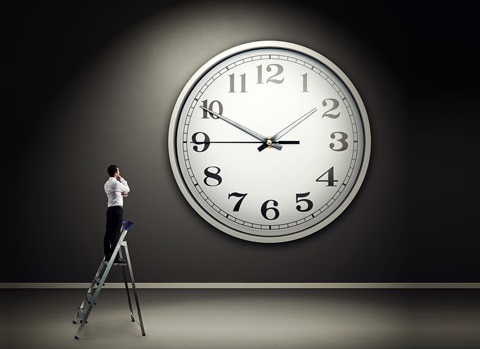 Many people have unrealistic expectations about how long a trade will take to play out. This causes all sorts of problems for them as they trade such as exiting too soon, over-trading and taking small profits, to name a few. Despite what most people think, good trades often take a longer time to play out than they think or than they would like, often days or weeks. This is especially true for our style of higher time frame trend-trading and swing trading.

Most people are oblivious to how long the market normally takes to move from point A to B. It may surprise you to know that the EURUSD moves only about 250 pips per week, on average, and that doesn’t mean up or down 250 pips, it means it moves in a 250 pip range on average. So, it may only move up 100 pips and then down 150 pips from there, for example. Thus, if you’re trading the EURUSD on the daily chart, you can assume that if you’re aiming to make 250 to 500 pips on a trade it’s going to take at least a week, if not two weeks or even more to play out.

The market is a slow, cumbersome beast. Today’s lesson is designed to prove this to you and to reinforce the need to hold trades for longer than you might be accustomed to or want to. Let the market do its ‘thing’ and give it room and time to move to your profit target.

Let’s begin by looking at some solid evidence that markets move in much smaller daily and weekly pip ranges than you might think.

The ATR or Average True Range is a tool on the MT4 trading platform that will show you a moving average of the ‘true range’ of a market for a given period of time. Simply put, a market experiencing a high level of volatility will have a higher ATR, and a low volatility market will have a lower ATR. This is important because it gives us some baseline expectation of how much a market is likely to move over the next day or week. We can use this information to help us determine how long a trade might take to go from point A to point B and also for stop loss placement. For example: you wouldn’t want your stop loss placed within the ATR of a market, because you might get knocked out just by the normal daily fluctuations of price. Ideally, you want your stop loss placed outside the ATR of a market and beyond any nearby support or resistance levels.

The typical value is a 14 period ATR, we will use a 10 period ATR for our examples. Keep in mind, ATR is basically a measure of volatility over X period of time, it does not show direction of price, only the volatility of its movement, or the range of its movement. Our purposes of using the ATR is to show you that most of the time markets are moving in smaller average pip ranges than you probably think, so that means you need to be more realistic in how long a trade might take to play out. That typically means holding the trade for longer than you want to or might be think you should have to.

Let’s start by learning how to find and insert the MT4 tool onto your charts:

1: Click on the “insert” button at the very top of your MT4 platform in the toolbar:

2: A dropdown menu will open, hover your mouse over the first selection which is “indicators”. To the right, you will now see “Average True Range”, click it… 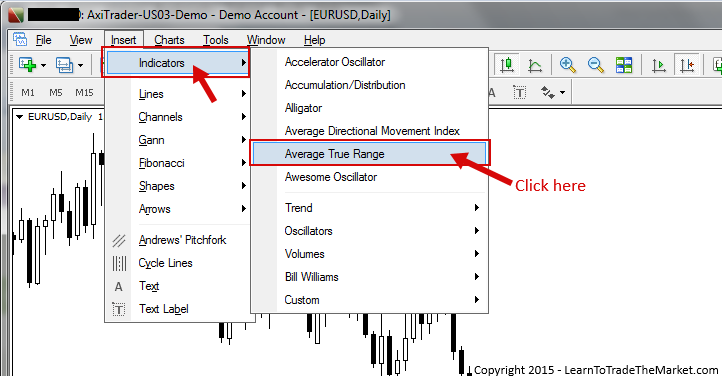 3. Once you click on “Average True Range” the ATR properties box will open as seen below. The main parameters you will concern yourself with are the colour of the ATR line and the period of time you want it to reflect. 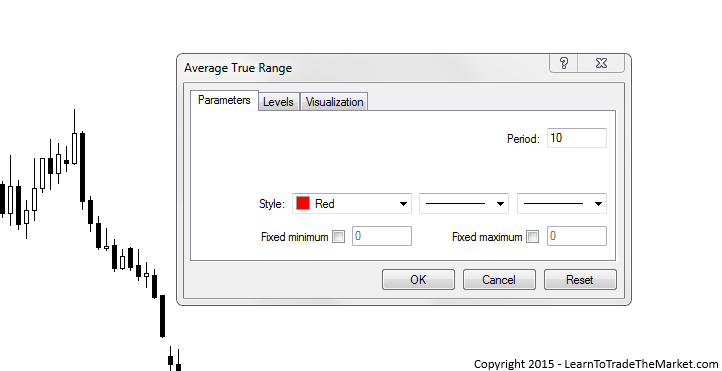 Next, in the chart below, we see the 10 period ATR applied to our daily EURUSD chart. Of importance here is noticing how long a market can stay in a relatively low ATR. From about the end of October to about the second week of December, the 10 period ATR in the EURUSD was hovering around 100. That means, the average daily volatility for any 10 day period during that time was only about a 100 pip range.

Thus, we have proof that we need wider stops than we might think to avoid the day-to-day and week-to-week noise (outside the ATR during that period would be at least a 100 pip stop loss), and we also need to hold trades longer. If you were short during the time period marked in the box on the chart below, you would have had to endure a lot of sideways / choppy price action, but note that the market did eventually fall significantly lower. Thus, it pays to simply ‘do nothing’ most of the time, which means holding your trades for a lot longer than you might want to: 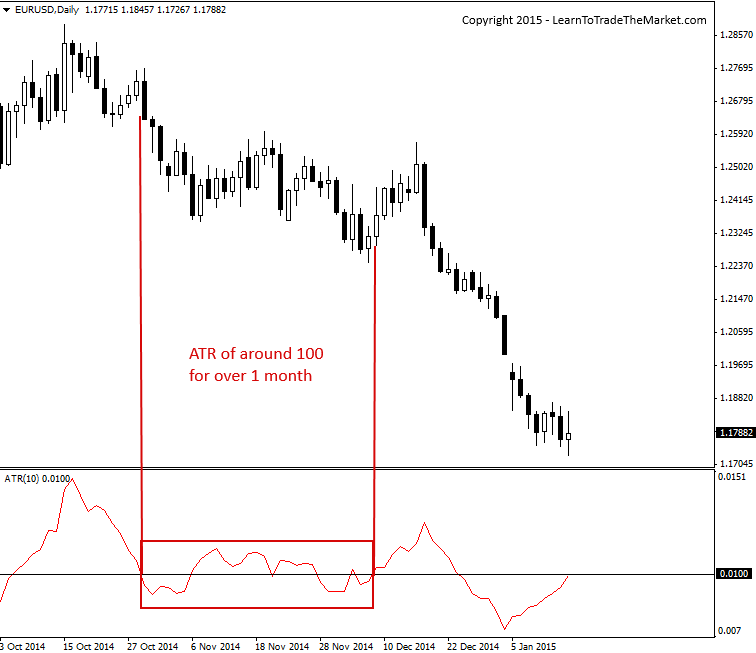 Examples of how long good trades can take to play out…

Now that you are aware that markets typically move in smaller daily and weekly pip ranges than you may have assumed before, let’s look at some real-world examples of good price action trade signals that took longer to play out than we may have liked. This should show you the need to adjust your expectations of how long a trade might take to play out…

This first example is of a nice EURUSD counter-trend fakey / false break strategy. Note that the down move eventually worked its way all the way down into the next key support down around 1.3500 before terminating. Thus, we can see that big moves in the market can take longer than we think to play out. In this example, this move took about 1 month to unfold. This is how patience will reward you in the market. Imagine if you just set this trade up, put a target just above 1.3500 and didn’t look at it for a month? You would not only have experienced less stress, but would have made a lot of money as well. I know that’s a ‘hindsight’ viewpoint, but the point remains that patience will reward you and that good trades do take longer than you think to play out… 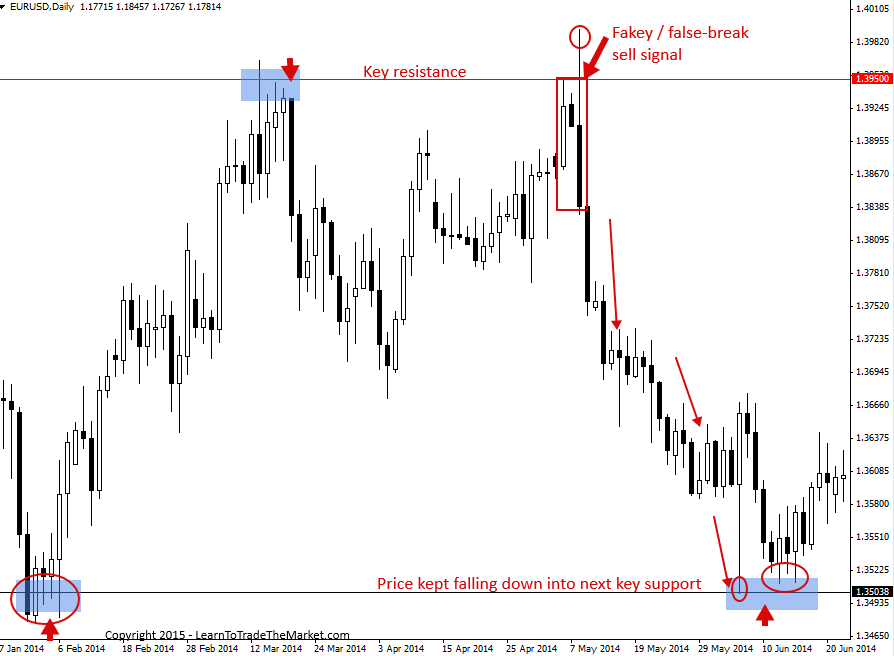 In the next example, we see a clear example of a pin bar sell signal in-line with an overall downtrend in the NZDUSD. There was an obvious recent support level down near 0.7710 that would have made a good target area for this trade…if you had the patience to let price work its way down to it. Note, the market took about 9 to 10 days after this pin bar formed to re-test that support. If you lacked patience and wanted an “instant profit”, you would have had a very long 10 days whilst price ground its way lower. Another clear example of how good trades can take longer than we think or want to play out (as well as how patience pays!)… 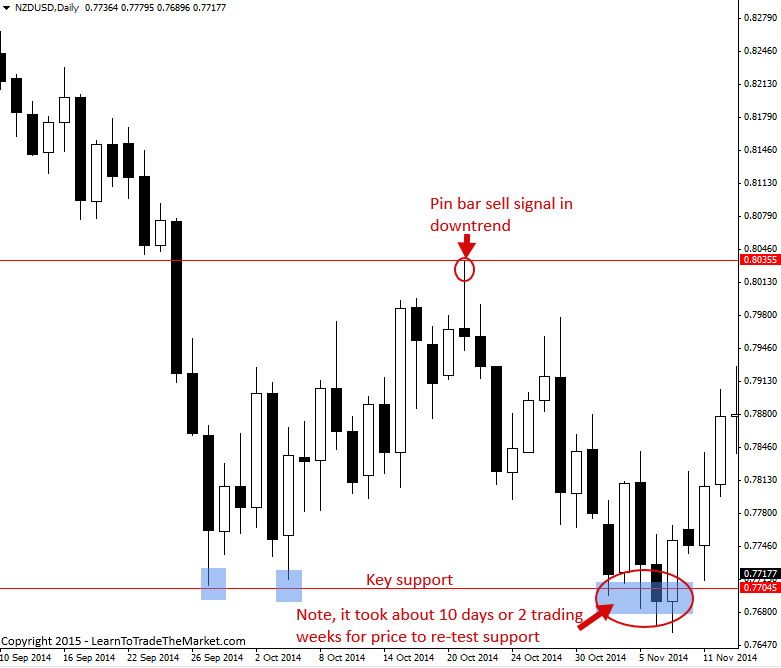 Next, we are looking at a EURJPY fakey pin bar combo signal that took about 10 days before it really got surging higher. This was a very good signal that formed at a key level. Would you have had the patience to just do nothing for the 10 days of slow grinding price action before the big upside breakout happened? Most people didn’t have the patience to hold and so they missed out on the most profitable part of the trade… 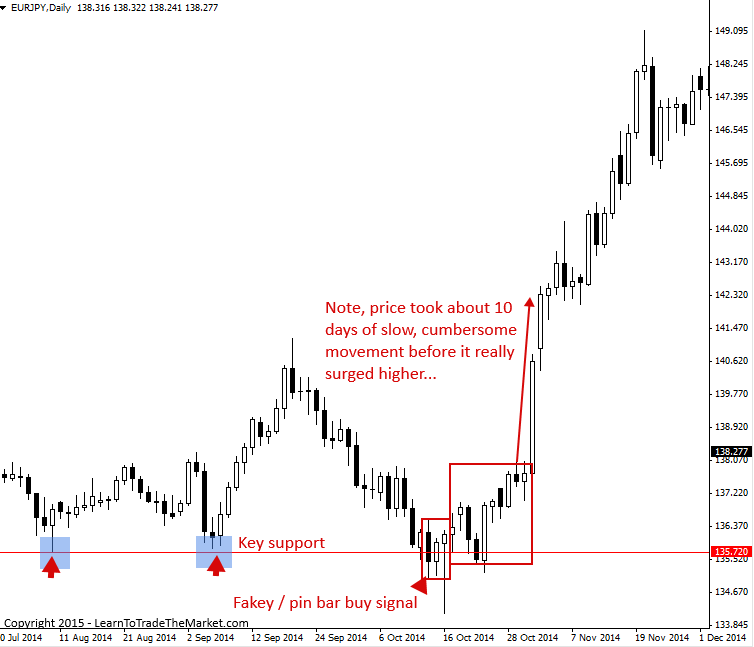 The chart below shows us another good example of a pin bar buy signal that formed at a support level and was then followed by slow / grinding price action before the big move higher took place. Note, there was about 6 or 7 days of price movement that slowly ground higher before the real breakout started. Many traders probably ‘freaked out’ and exited during the first 6 days of slow upward / sideways price movement and took a very small profit right before the market surged higher without them on board. This goes to show how dangerous over-thinking and over-analysis of your trades can be. Just take a simple set and forget approach to your trade management… 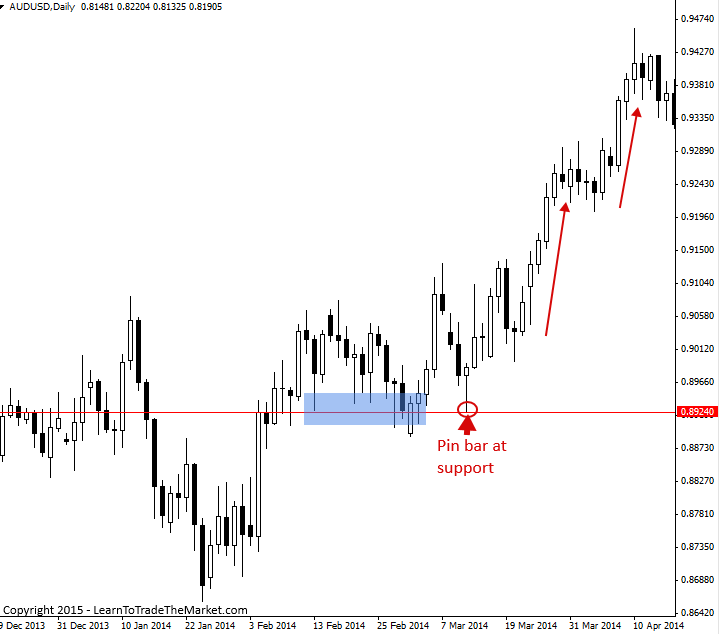 This next example is a very clear example of how good trades can take longer to play out than we think (or want). Note the long-tailed bearish pin bar that formed in this market back on September 19th of 2014. Based on the size and the nice bearish close exactly at the low of this pin, you would have thought at the time that price would immediately start falling after this pin bar formed. However, as we can see that was certainly not the case because if you shorted the market after this pin bar formed you would have had to endure 7 days of sideways very choppy price movement before price finally started rolling over. But, when it did start falling finally, it fell like a rock and eventually tested the key support down near 169.35…a move of about 800 pips from the low of the pin bar! This is how patience is rewarded by the market! 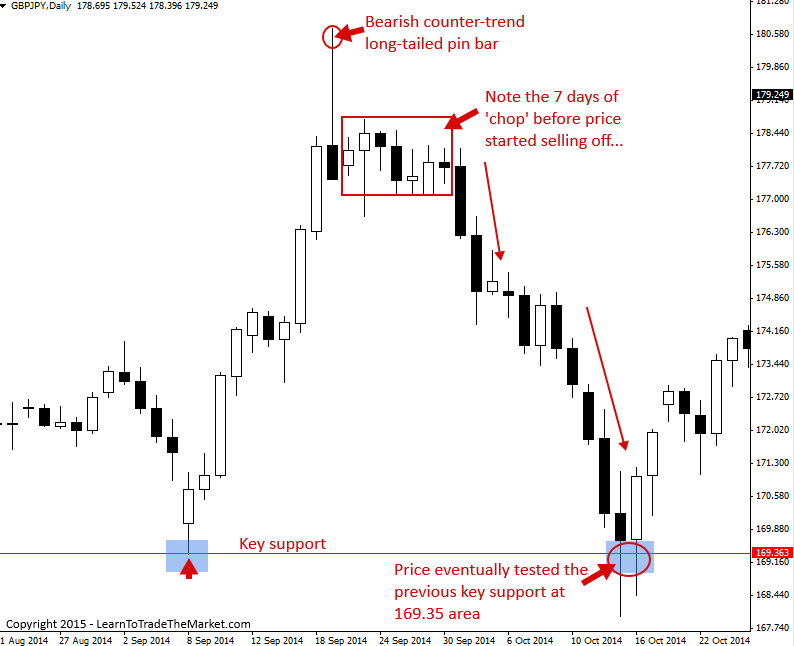 The spot Gold market provides us with some very good signals sometimes. But, they don’t always fire off immediately as we would like, just like the other examples here. In the chart below, note the long-tailed bullish pin bar. If you entered on a ‘trade entry trick’ near the pin bar’s 50% level, you would have had to endure price initially moving in your favour, only to come all the way back to your entry over a 3 week period before then bursting higher and really making you some solid profits IF you had held on… 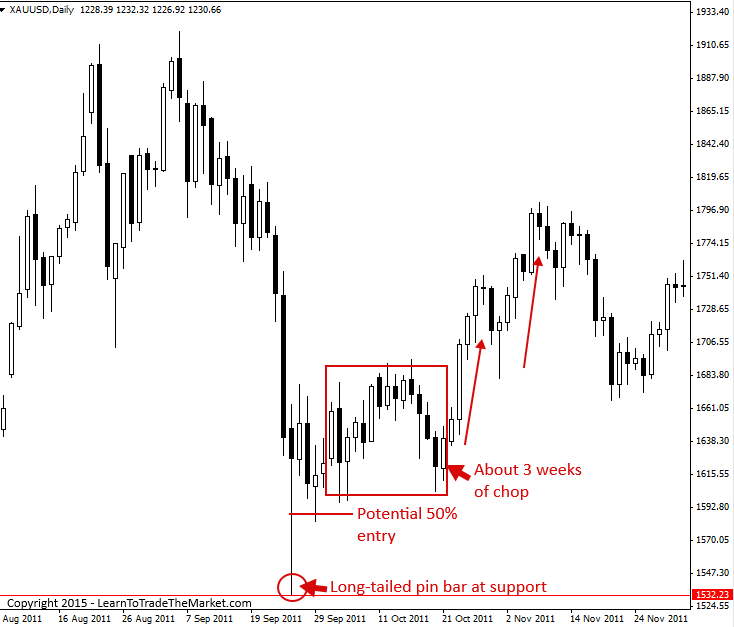 Finally, the last example we are looking at is a 4 hour chart GBPUSD fakey pin bar combo buy signal. Note, you also need to adopt a longer time horizon on 4 hour charts too. This market chopped sideways for 20 hours after this 4 hour signal formed before finally bursting higher. Again, patience pays. 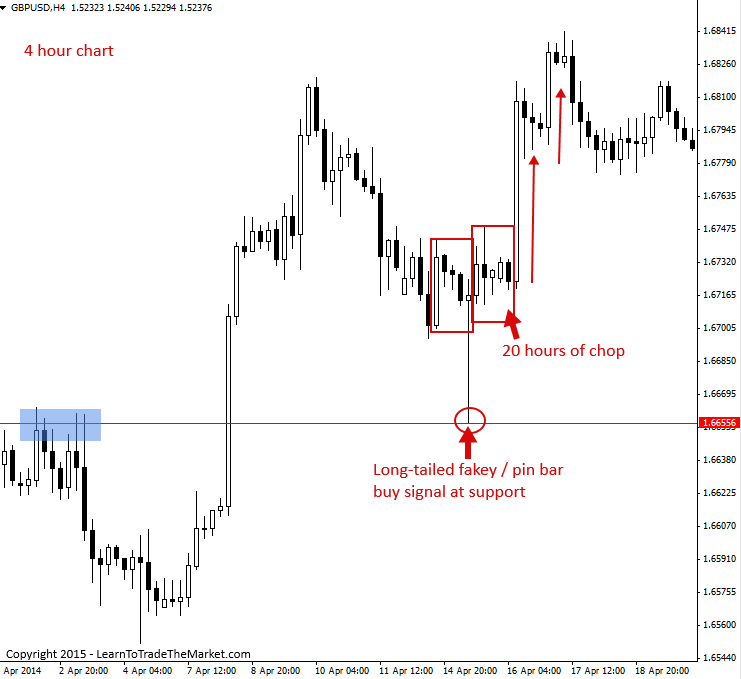 The main point of today’s lesson was to show you that good price action signals don’t always immediately move in our favour (sometimes they do, and that’s great! But often times they don’t, which is the point I’m trying to get across to you here!). Sometimes they take weeks to play out, or even a month or more as we saw in some examples above. The point is, don’t get in a rush to make money as a trader, or you won’t make any. Trading is a marathon, not a sprint, just as in the fable of the Tortoise and the Hare.

You have to trade ‘loose’. Meaning, don’t get too attached or over-involved with the market. Set your trades up and walk away until the next day and remember that you need to give the market both SPACE AND TIME to move so that it can move in your favour and make you some serious money. After all, isn’t making serious money the reason why you’re trading in the first place? Well, this is how it’s done; holding trades, having patience and having the ballz to not get shaken out at every little fluctuation against your positions.

If you want to learn more about how to identify and trade price action signals like the ones seen in these examples, checkout my newly updated price action trading course for in-depth instruction and training.

I WOULD LOVE TO HEAR YOUR THOUGHTS, PLEASE LEAVE A COMMENT BELOW :)