The Tortoise vs. The Hare – A Trading Metaphor 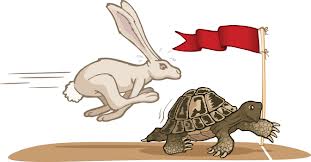 Everyone knows the story of the Tortoise and the Hare, but what you might not know is that it can be a very effective metaphor to describe the differences between winning and losing traders. Like the Hare, you probably experienced a lot of excitement and success right out of the gate, as you began trading your first live account. However, because you probably did not pace yourself by being consistent in your approach, you saw your early success evaporate as time went on, just as the Hare did. The Tortoise was much slower than the Hare, but because he was consistent and unemotional, he eventually won the race as you probably know. Thus, your goal as a trader, is to trade more like the Tortoise and less like the Hare, because that is how the trading game is won…

Are you a “Tortoise” or a “Hare” in the market?

In the fable of The Tortoise and the Hare, the Hare begins the race by ridiculing the slow-moving Tortoise and then leaving him behind in the dust as he sprints off from the starting line. The Tortoise, unemotional but sure of himself, begins the race in a slow but consistent manner, pacing himself from the start. The Hare gets distracted by other animals along the way, stopping to show off his speed as he tries to impress some lady rabbits (in the Disney video version) and as we all know, stopping for a nap along the way as well. Unfortunately for the Hare, this inconsistency and emotion gets the better of him and ultimately is the reason why he loses to the much slower Tortoise, even though he started with a huge physical advantage. The Tortoise may have had a disadvantage physically, but because his mindset was more consistent and in-sync with what it took to win the race, he out-lasted the haphazard and emotional Hare, and ultimately made it across the finish line first.

This fable of the Tortoise and the Hare really does a good job of describing the primary differences between traders who consistently lose money in the market and those who consistently make money. Traders who trade with a lot of inconsistency, haphazardness and emotion, are the ones who struggle and suffer through the pain of continuously blowing out their trading accounts, these traders are trading as if they are the “Hare”. Traders who take a slower and more consistent approach, like the Tortoise, tend to do much better in the long-run and don’t experience the severe emotional and financial ups and downs as the “Hare” traders.

Anyone who has followed my blog for a while knows that I am a huge proponent of the low frequency trading model. As I discuss in my article on low frequency vs. high frequency trading, it is a pretty well studied fact that day-traders and other high-frequency traders make far less money over the course of their trading careers than lower frequency traders who take a slower and more consistent approach, like the “Tortoise”. In fact, for most people, taking a low-frequency approach to trading and trading like the Tortoise, is really the only chance they have at making significant money in the market over the long-run.

Trading is a marathon, not a sprint 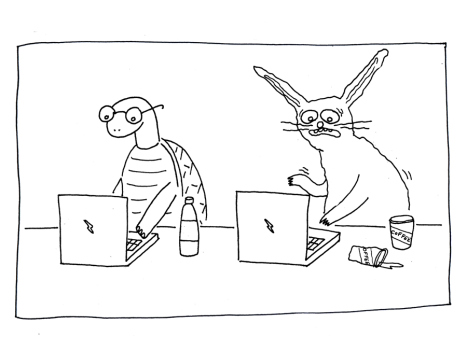 Note, in the section above I ended with talking about the “long-run”, this is a key point in this whole lesson. It is not difficult to get lucky and hit a few nice winners early in your trading career, just as the Hare got off to a good start against the Tortoise. However, what differentiates winning and losing traders is not the ability to get lucky or use up all their trading capital in the first month of live trading, but the ability to remain disciplined and patient even in the face of constant temptation to over-trade and over-leverage their account, in other words, you need to pace yourself as you trade.

The Tortoise paced himself in the race against the Rabbit, and this ultimately allowed him to beat the Rabbit, who didn’t prepare properly and who clearly under-estimated the importance of mindset over ability. The Hare blew all his energy in the early-going (trading money) and got over-confident (very common among struggling traders), so much so that he literally fell asleep halfway through the race, which ultimately led to him losing to the much slower Tortoise.

Many traders tend to focus too much on the short-term, treating their trading as if it is some all-out sprint to the finish line. When they hit upon a couple of winners, they tend to then over-estimate the role that their trading ability played and underestimate the importance of remaining consistent and not doubling up their risk on the next trade. As I discussed in my article on getting back your trading mojo, traders tend to do the most damage to themselves right after a big winning trade or multiple winning trades. Like the Rabbit, they become frantic and over-excited, instead of remaining calm and collected like the Tortoise. This typically results in them over-estimating their trading ability, which causes them to start cranking up their risk per trade and over-trading, also known as burning up your trading capital.

Just as the Tortoise did, you have to preserve your energy to win the trading race. In other words, you need to preserve your trading capital for high-probability price action setups, rather than blowing it on random gambles in the market. Furthermore, I want you to think of trading as a marathon, not a sprint, because you need to pace yourself if you want to make it through to the land of successful trading and win the “marathon”. “Sprinting” has no place in the professional trader’s trading approach; slow and steady truly does win the marathon of trading.

The Tortoise reaped the big reward

Despite the odds seemingly stacked against the Tortoise at the beginning of the race, he ultimately takes home the trophy. This is exactly the same as two traders starting out with different size trading accounts, one large, one small and the trader with small account might find after 3 years of trading he has a lot more money in his account than the trader who started with the large account. This happens all the time in the market, and it’s because it doesn’t matter how much money you have, what matter is your ability to trade and your ability to manage your emotion and your money. Consistency always wins in the end.

As I discussed previously, you need to preserve your trading capital for the obvious trade setups, and not blow it all soon after you star trading live. The Hare expended too much energy in the early going, whereas the Tortoise stayed consistent. You need to save your money like the Tortoise so that you can stay in the game long enough to hit enough big winners so that you end the year profitable. Many traders do so much damage to their trading accounts early in the year that they have no chance of ending the year in profit. You need to try to have less trades but more certainty in the trades you do take, think about eventually becoming a “baller trader” with lower overall risk and higher rewards. This is how you make money over the long-run, it is not done by trading constantly until your money is gone. If you do this you will surely get passed up by trader who had smaller accounts but who had a better trading mindset and who understood the importance of trading with consistency. 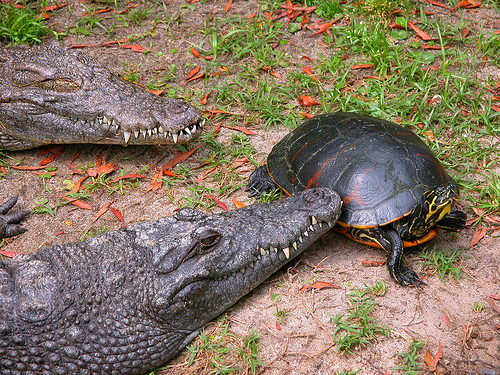 Crocodiles and Tortoises can both teach us a lot about trading. As I discussed in my article on Trading like a Crocodile, we need to be patient and stealthy as traders, like a Croc, waiting for the easy “prey” and then acting on it with confidence. The theme is clear here; slow and steady wins the race. If you do a bit of research on both Crocodiles and Tortoises, you will see that both have been around since the time Dinosaurs walked the Earth; hundreds of millions of years ago. This clearly tells us that their slow yet consistent approach to life is one that pays off with great rewards in the long-run.

If you want to learn how to trade like the Tortoise and less like the Hare, so that you can have long-term, lasting success in the market, checkout my Forex price action trading course for more information.