Part 5: What is Fundamental Analysis?

What is Fundamental Analysis?

The idea behind fundamental analysis is that if a country’s current or future economic picture is strong, their currency should strengthen. A strong economy attracts foreign investment and businesses, and this means foreigners must purchase a country’s currency to invest or start a business there. So, essentially, it all boils down to supply and demand; a country with a strong and growing economy will experience stronger demand for their currency, which will work to lessen supply and drive up the value of the currency.

For example, if the Australian economy is gaining strength, the Australian dollar will increase in value relative to other currencies. One main reason a country’s currency becomes more valuable as its economy grows and strengthens is because a country will typically raise interest rates to control growth and inflation. Higher interest rates are attractive to foreign investors and as a result they will need to buy Aussie dollars in order to invest in Australia, this of course will drive up the demand and price of the currency and lessen the supply of it.

Now, let’s quickly go over some of the most important economic events that drive Forex price movement. This is just to familiarize you with some more of the jargon that you will likely come across on your Forex journey, you don’t need to worry too much about these economic events besides being aware of the times they are released each month, which can be found each day in my Forex trade setups commentary.

The GDP report is one of the most important of all economic indicators. It is the biggest measure of the overall state of the economy. The GDP number is released at 8:30 am EST on the last day of each quarter and it reflects the previous quarter’s activity. The GDP is the aggregate (total) monetary value of all the goods and services produced by the entire economy during the quarter being measured; this does not include international activity however. The growth rate of GDP is the important number to look for.

Trade balance is a measure of the difference between imports and exports of tangible goods and services. The level of a country’s trade balance and changes in exports vs. imports is widely followed and an important indicator of a country’s overall economic strength. It’s better to have more exports than imports, as exports help grow a country’s economy and reflect the overall health of its manufacturing sector.

The CPI report is the most widely used measure of inflation. This report is released at 8:30 am EST around the 15th of each month and it reflects the previous month’s data. CPI measures the change in the cost of a bundle of consumer goods and services from month to month.

Along with the CPI, the PPI is one of the two most important measures of inflation. This report is released at 8:30 am EST during the second full week of each month and it reflects the previous month’s data. The producer price index measures the price of goods at the wholesale level. So to contrast with CPI, the PPI measures how much producers are receiving for the goods while CPI measures the cost paid by consumers for goods.

The most important employment announcement occurs on the first Friday of every month at 8:30 am EST. This announcement includes the unemployment rate; which is the percentage of the work force that is unemployed, the number of new jobs created, the average hours worked per week, and average hourly earnings. This report often results in significant market movement. You will often hear traders and analysts talking about “NFP”, this means Non-Farm Employment report, and it is perhaps the one report each month that has the greatest power to move the markets.

The durable goods orders report gives a measurement of how much people are spending on longer-term purchases, these are defined as products that are expected to last more than three years. The report is released at 8:30 am EST around the 26th of each month and is believed to provide some insight into the future of the manufacturing industry.

The Retail Sales Index measures goods sold within the retail industry, from large chains to smaller local stores, it takes a sampling of a set of retail stores across the country. The Retail Sales Index is released at 8:30 am EST around the 12th of the month; it reflects data from the previous month. This report is often revised fairly significantly after the final numbers come out.

Interest rates are the main driver in Forex markets; all of the above mentioned economic indicators are closely watched by the Federal Open Market Committee in order to gauge the overall health of the economy. The Fed can use the tools at its disposable to lower, raise, or leave interest rates unchanged, depending on the evidence it has gathered on the health of the economy. So while interest rates are the main driver of Forex price action, all of the above economic indicators are also very important. 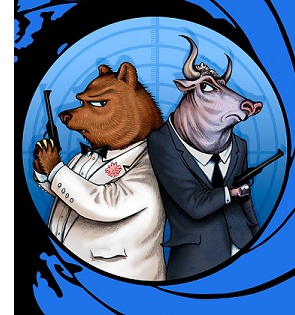 One of the main reasons why I and all of my members prefer to trade primarily with technical analysis is because there are literally millions of different variables in the world that can affect financial markets at any one time. Now, Forex is more affected by macro events like a country’s interest rate policy or GDP numbers, but other major news events like wars or natural disasters can also cause the Forex market to move. Thus, since I and many others believe that all of these world events are factored into price and readily visible by analyzing it, there is simply no reason to try and follow all the economic news events that occur each day, in order to trade the markets.

One of the main arguments that I have read that fundamental analysts have against technical analysts is that past price data cannot predict or help predict future price movement, and instead you must use future or impending news (fundamentals) to predict the price movement of a market. So, I thought it would be a good idea to give my response to these two arguments against technical analysis:

1) If fundamental analysts want to try and tell me that past price data is not important, then I would like them to explain to me why horizontal levels of support and resistance are clearly significant. I would also like to ask them how myself and many other price action traders can successfully trade the markets by learning to trade off of a handful of simple yet powerfully predictive price action signals:

Looking at the daily spot Gold chart above, we can clearly see that support and resistance levels are important to watch. Any Fundamental analyst, who wants to say that charts don’t matter, is simply wrong, and you will come to this conclusion on your own when you spend more time studying some price charts.

2) The next argument that Fundamental analysts use is that you can more accurately predict a market’s price movement by analyze impending forex news events. Well, anyone who has traded for any length of time knows that markets often and usually react opposite to what an impending news event implies. Are there times when the market moves in the direction implied by a news event? Yes, absolutely, but is it something you can build a trading strategy and trading plan around? No.

The reason is that markets operate on expectations of the future. This is actually an accepted fact of trading and investing, so it’s a little strange to me that some people still ignore technical analysis or don’t primarily focus on it when analyzing and trading the markets. Let me explain: if Non-farm payrolls is coming out (the most important economic report each month, released in the U.S.) and the market is expecting 100,000 more jobs added last month, the market will likely already have moved in anticipation of this number. So, if the actual number is 100,000 even, the market will probably move lower, instead of higher…since there were not MORE added jobs than expected. So, while 100,000 new jobs might be a good number, the fact that the actual report did not exceed expectations is bad for traders and investors (can you see how this junk gets confusing now? I almost confused myself writing this…).

AND NOW FOR MY FINAL POINT: Since all of the preceding expectations of a news release have already been carried out and are visible on the price chart, why not just analyze and learn to trade off the price action on the price chart?? What a novel idea! You see, even after the news is released we can still use technical analysis to trade the price movement, so really technical analysis is the clearest, most practical, and most useful way to analyze and trade the markets. Am I saying there is no room for Fundamental analysis in a Forex trader’s tool box? Absolutely not. But, what I am saying is that it should be viewed and used as a compliment to technical analysis and it should be used sparingly, when in doubt consult the charts and read the price action, only use Fundamentals to support your Technical view or out of pure curiosity, never rely solely on Fundamentals to predict or trade the markets.

Jump To Next Chapter – Part 6: What is Price Action Trading Analysis?

Syllabus Of All Chapters

Part 1: Introduction – What Is Forex Trading ?

Part 4: What is Professional Forex Trading?

Part 5: What is Fundamental Analysis?

Part 8: What Is A Forex Trading Strategy?

Part 10: What is Technical Analysis

Part 11: How to Make a Forex Trading Plan

Part 12: The Psychology of Forex Trading