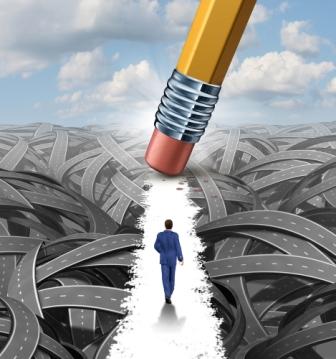 Today’s lesson is going to be about changing how you think about trading. Instead of acting on your first impulse in the market, I want you to stop and think about what’s REALLY going on…

I want you to look at trading as two dimensional; somebody wins and somebody loses. When a market is moving one way, most retail traders jump on board somewhere in the middle or near the end of that move when it feels and looks the ‘safest’. However, often when it’s at these times when it looks ‘safe’ to enter, that the market is about ready to reverse. Do you ever stop to think “Who’s taking the other side of my trades?”

Who is taking on the risk when you place a trade? The person who wants you to lose, that’s who, because if you lose, they win. Therefore, they are your opponent, and since the majority of retail traders lose, that means the person taking their risk and turning into profit, are the professional traders.

The trading strategy of the professional, no matter how complex one wants to make it, is simply to take on the retail trader and to take on other professionals (opponents). They make large sums of money when the bets / speculative positions of the others traders go wrong and those traders ultimately end up losing as prices reverse in the opposite direction

The AUDUSD chart example below shows us a clear example of professionals taking on the risk of the amateurs. The uptrend was intact for quite a while before establishing a key resistance level / horizontal level up near 0.9450. As the market came back up and re-tested that key resistance near 0.9450 and tried to push above it, it was mostly a ‘desperation move’ by all the amateurs who were entering near the top of the move and hoping for a breakout…even though the trend had already run higher for months.

If you look closely, you’ll see the uptrend was already quite stale as it ran from about mid-January to mid-April. The professional traders were already on-board and had already made their money by the time price started reversing up near 0.9450. We can then see price failed to push back above key resistance on two occasions. This was caused by amateur traders thinking the uptrend would continue and a breakout was imminent. The professionals could sense that the up move was coming to an end and they gladly took on the risk of the more emotion-fueled, impulsive amateur traders…. 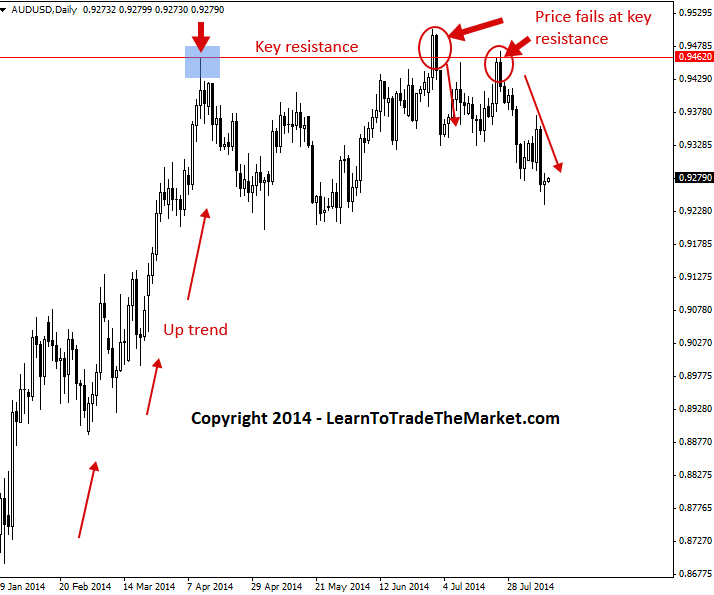 The next example is the DAX30 – German Stock Index daily chart. Note the false break of the recent high in June, followed by another test and failure at that level, then the market just sold-off hard. This is another clear of example of watching key levels closely for possible price action reversals, as it’s at these key levels that the professionals are usually stepping in to take on the amateurs… 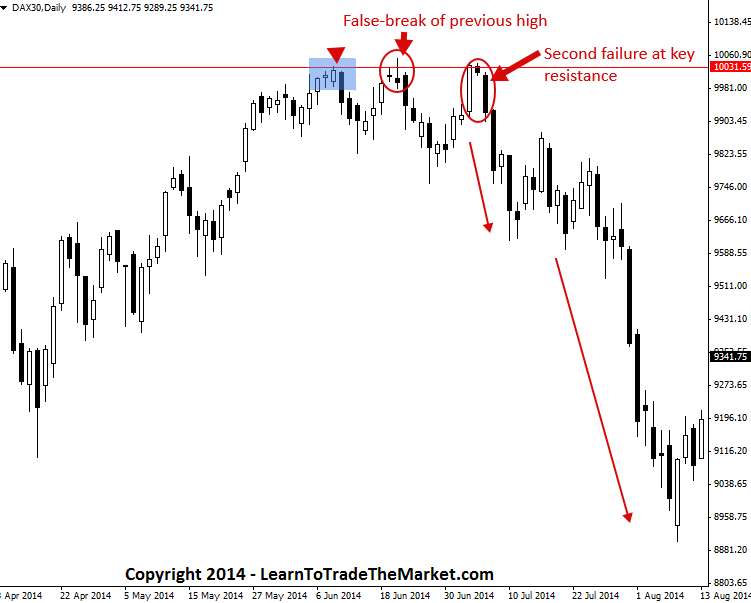 Here’s another good example of trading like a professional…

The S&P 500 had a false-break / failure at key resistance up near 1977.50 back in late July of this year. The market then fell away dramatically, netting anyone who shorted a significant gain. Again, watching for false-breaks of key levels like this is very important as they often lead to huge moves in the other direction, which means quick profits to you, if you know how to spot the moves before they happen.

The S&P 500 then created a false-break of key support down near 1900.00 following the huge sell-off. As a perfect real-world example, checkout our call on the S&P in our July 31st market commentary, we were clearly anticipating a potential buy entry down near 1900.00 key support. Successful traders know that trading is a game of anticipation. 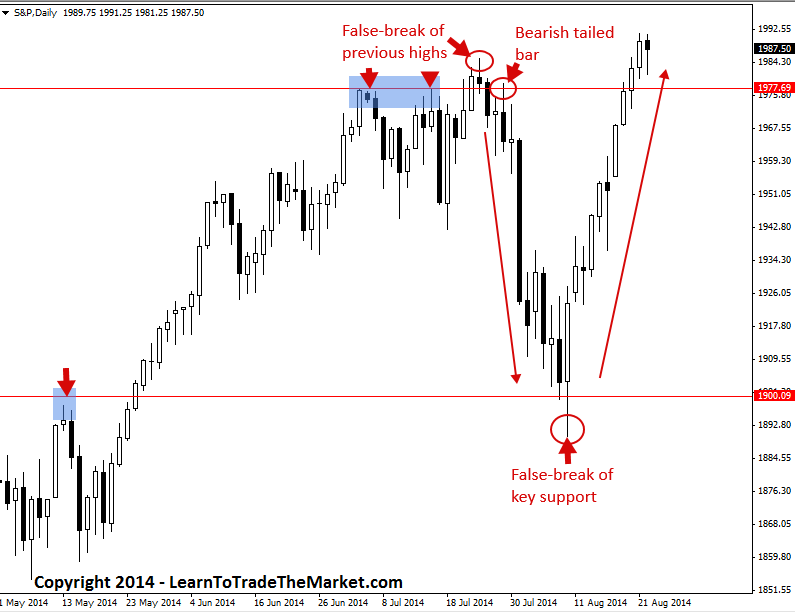 The strategy is contrarian, it might be with or against the trend, it may be inside a trading range, it can take on many forms. The key is that you understand the concept clearly. That concept could be simply said as ‘professionals doing the opposite to what the herd is doing’.

Professional traders are always thinking something along the lines of, “What are the amateurs doing?” or “What is the most obvious trade that a losing trader who’s operating on emotion instead of logic and planning would take?”

Asking yourself simple questions like these, before entering a trade, can significantly increase your chances of success in the market. After all, we all know about 90% of traders lose money in the long-run, so it only make sense to try and do the opposite of what they are doing.

If a trend has already run for months, chances are the professionals have already made their money on it or at least have a lot of profit locked in. Thus, if a market has been trending for months and is nearing a key support level or resistance level, you need to ask yourself if “entering here is what the pros are doing or what the amateurs are doing?”

Similarly, if a fresh trend has recently begun, and the market pulls back a little bit to a support or resistance level, the professionals are probably looking for an entry with that fresh / near-term momentum.

Amateur traders often ignore changing market dynamics until it’s too late and the move is already over. Professional traders get on new trends early, they don’t wait until the trend is almost over, as amateurs do.

A strategy is always the underlying reasoning behind the savvy professional’s entry in the market, he is not just entering randomly, not at all. He (or she) is calculated, he is reading the chart and he is reading the emotion of all market participants in that chart (price action), he sees and feels the clues being printed day by day. He pounces with precision, striking his prey (the herd) with ice in his veins.

You’re probably wondering what strategies one can employ to trade in this manner.

Some of the greatest traders have said you only need a simple horizontal line to trade the market successfully.

I take that one step further and add price action confirmation signals, e.g., pin bars, false breaks, fakeys and so on, that occur at these horizontal lines.

By trading at and around these key chart levels, we can also apply stricter risk control. It’s often as simple as saying, if below this level, we expect it to fall, or if above this level we expect it to bounce. As can be seen, key horizontal levels allow for ideal risk management. It’s often why markets reverse on a dime on these levels and round numbers and so on. Try drawing them in on your charts each day and week and you will see their effectiveness for yourself.

When you combine price action with key levels, you’re now starting to see the market like a professional and you’re gaining the ‘unfair edge’ over your competition in the market.

If you think of the market as a sea of competitors, and within this sea of competitors is a school of traders much like a school of fish. They will stick together, follow each other in a comfort zone, most don’t know who is leading who. If you can imagine each short-term daily swing in the market as a school of lost fish following one another, you can shape the reality in your favor. “What are most people doing today?” If they are likely to be wrong (more often than not), then I need to think logically and consider doing the opposite / being a contrarian. How can I use price action signals and key market levels to guide me in taking on my opponents and taking an opposing view to the herd, the school, and the masses?

If you start employing this logic from time to time, taking a step back and looking at the market from the opposite side of the fence (the professionals side) you may not only find some great trading opportunities, you may start avoiding some bad trades as well. To learn more about trading like a professional by using simple price action strategies and key chart levels, checkout my trading course.

To your success – Nial Fuller