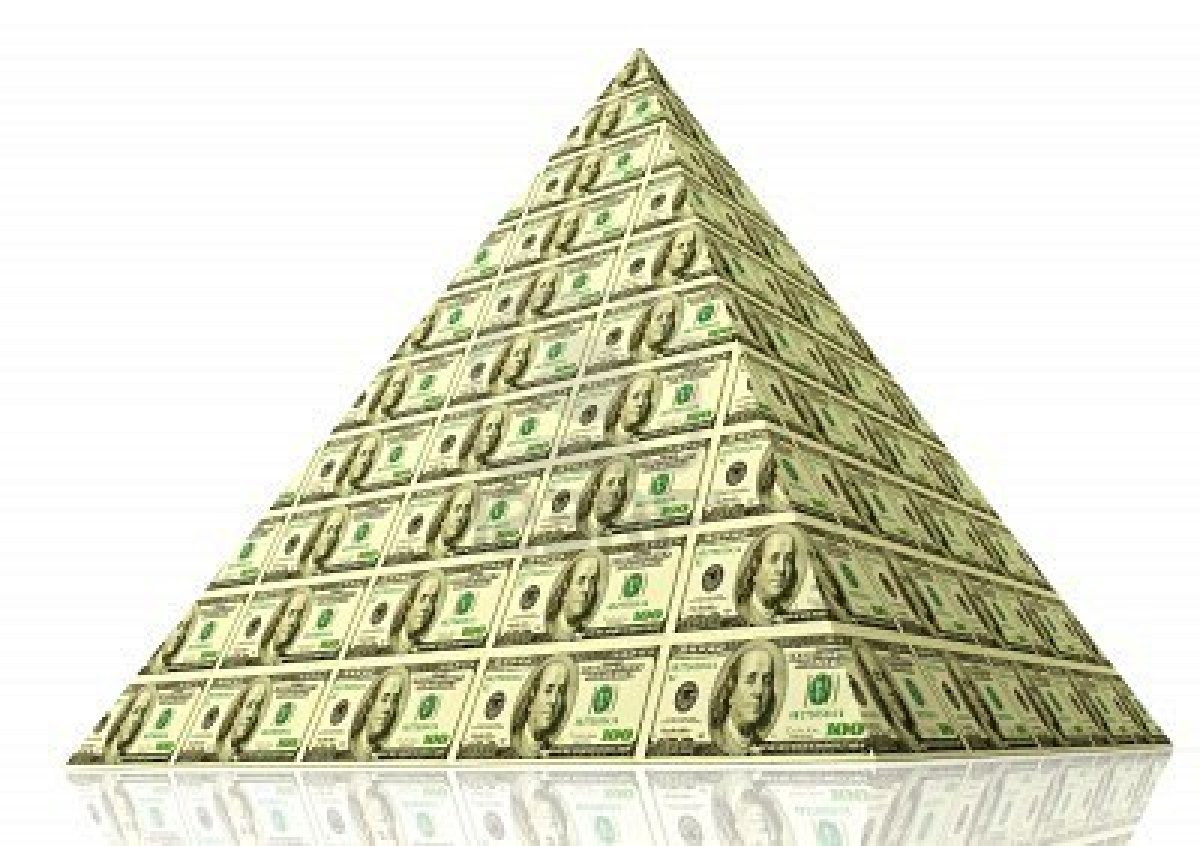 “Let your winners run” they always say. Great! But, HOW do I do that? How do I turn small trades into big winners? You’ve probably asked yourself this many times. As great as all these old trading aphorisms are, they do seem a bit vague and don’t really give us any specifics or details on how exactly one accomplishes the wonderful things they imply.

Today, we are going to discuss how you can turn small trades into big winners, it’s called pyramiding. You’ve probably heard of pyramiding before, generally it tends to have a negative connotation to it, but that’s just because most traders don’t understand how to pyramid properly.

Not every trade is a candidate for pyramiding, in fact most aren’t, but the ones that are can make you a lot of money, quickly. One pyramid trade that nets you a 10 to 1 winner might be the only winning trade you need for three or four months, that’s why it’s so important you understand how to pyramid properly…

Pyramiding: Playing with the market’s money

The main concept to understand behind pyramiding, is that it allows you to ‘play with the market’s money’ because as a trade moves in your favor you trail your stop loss down (or up) to lock in profit when you add another position. This basically means your overall risk on the trade stays the same or decreases as you lock in profit, but your potential profit increases, assuming you do it properly (more on this later).

However, you need to be aware that whilst the upside benefit to pyramiding is large, the risks can also be large if you don’t pyramid properly. If you do not properly trail your stop to keep the overall risk the same or less each time you add a position, you’ll be dangerously cranking up your risk to a level that could blow out your account. Also, since you’ll be trailing your stop loss perhaps tighter than you would on a non-pyramid trade, as the trade moves in your favor it increases the chances of the market snapping back against you and stopping you out of the entire position.

We only try to pyramid into a trade if we are confident that the market is in a strong ‘one way move’ with momentum. It doesn’t have to be a breakout, it just has to be a substantial move that you expect will have strong momentum behind it.

Now that we’ve discussed what it means to ‘play with the markets money’ and the potential risks in pyramiding, let’s talk about how to pyramid properly, so that you can avoid the major risks of pyramiding but still having a chance at large gains…

How to Pyramid into a position properly

The basic concept of pyramiding into a position is that you add to the position as the market moves in your favor. Your stop loss moves up or down (depending on trade direction of course) to lock in profit as you add lots / contracts. This is how you keep your overall risk at 1R whilst increasing your position size on the trade.

Thus, as you add contracts / lots, the potential profit on the trade increases exponentially, whilst initial risk (1R) remains constant. Our hope, as traders in a pyramided position, is that the market won’t then snap back and stop us out before it falls or rises further in our favor.

Think about it like this: The market makes an initial burst in your favor, perhaps to the 1R or 2R reward point, you then add another position whilst trailing the original stop loss on the first position to break even or to 1R to lock in profit. You are still exposed to a 1R risk on the second / pyramided position, but you now have double the position size because your first lot is still live.

Let’s look at an example of what a properly pyramided trade might look like, this will also give you a better idea of the math behind proper pyramiding:

Let’s assume the EURUSD is trending lower like it has been recently. You see a solid pin bar sell signal that formed showing rejection of the 1.3670 resistance level. You decide that since price has respected this level and it’s obviously a key chart level, it’s a good place to set your stop loss just above. So you decide to put your stop loss for the trade at 1.3700, stop loss placement is very important and it’s something you should not take lightly.

You decide to aim for a risk reward of 1:3 on this trade, so you set your initial target at 1.3300 and you plan on adding two positions to this trade, one when you are up 100 pips and another when you’re up 200 pips. You plan on doing this because the market is trending strongly and you have a strong gut feeling that there’s a good chance the trend will continue without a large pullback.

Here is what your trade looks like at entry:

The trade falls in your favor and so you proceed as planned by adding another 2 mini-lots at 1.3500. So, your full position is now 4 mini-lots or $4 per pip, this means your potential reward on the trade is now $1,000 if price hits your target at 1.3300. 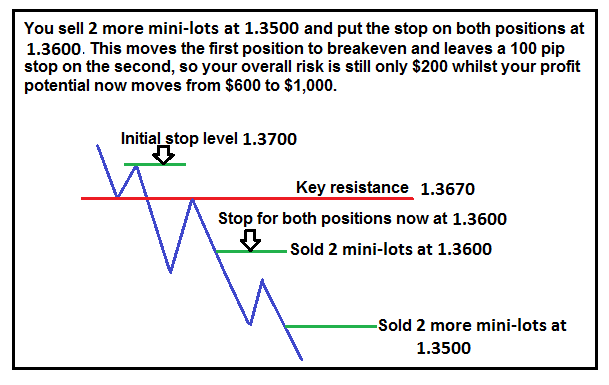 The trade keeps moving in your favor so you decide to add your final position of 2 more mini-lots. You now have a $6 per pip overall position size. You have a potential profit of $1,200, double what it was when you first entered the trade, and the best part is, your overall risk is now at $0…

How’s that possible you’re asking? You’ve trailed down the stop loss on both previous positions to 1.3500, locking in a $200 profit on the first position you entered at 1.3600 and reducing the risk on the second position to breakeven. The $200 profit you locked in on the first position thus offsets the $200 risk you added on the last position, making it a totally ‘free’ trade; that’s how you ‘play with the market’s money’… 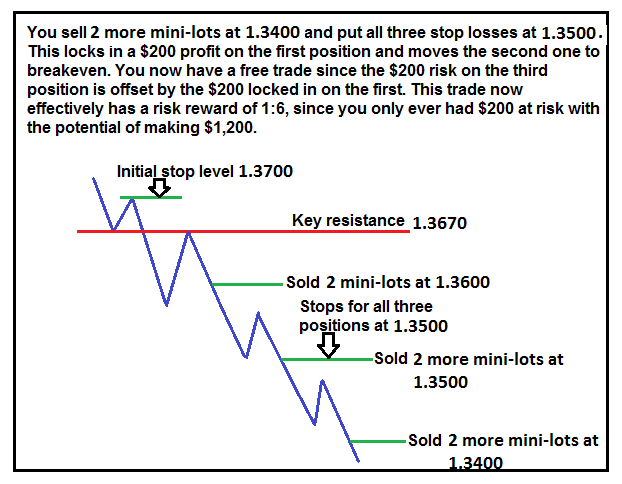 You have yet more good fortune and the trade continues falling and hits your target at 1.3300, all three positions are now closed and you’ve netted 6 times your risk, for a risk : reward of 1:6. You never had more than $200 (1R) at risk at any one time, yet you profited $1,200.

Now you understand how to pyramid your way to profits… 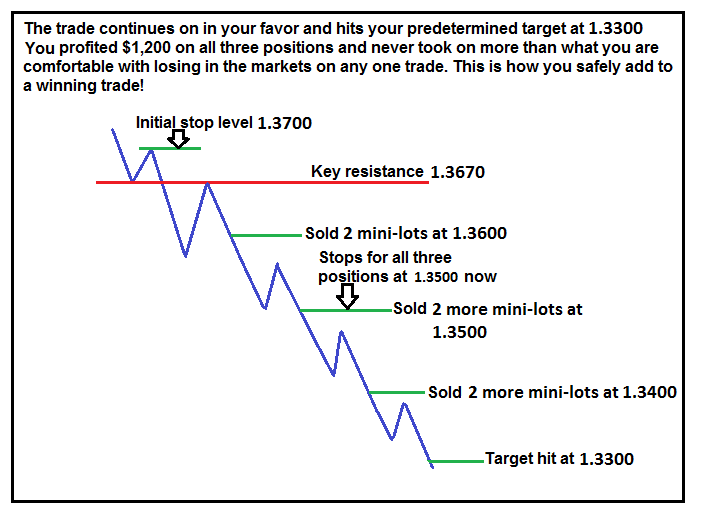 In the example above, we used a relatively low risk amount at $200 per trade for example’s sake. But, you can see how quickly pyramiding can build your profits. You have the potential to turn $1,000 risk on a trade into $10,000 in a short span of time, a 10 to 1 winner. These kinds of trades are very possible if you’re trading a clean move, that can be a large single-day move or a large move over the course of a week perhaps.

An important thing to understand is that it does take some experience to know when pyramiding into a trade may be a good idea and when it’s not. You also need to be prepared to get stopped out at breakeven, because when you’re trailing your stop loss down like we discussed above, it doesn’t take a very large retrace to knock you out of all your pyramided positions. But, if you get just one successful pyramided trade every 3 or 4 months, you’ll be doing quite well.

Another important point is to not let greed take over. You need to plan out how many positions you’ll add before you enter and when you will add them, etc. Don’t just totally ‘wing it’, or you’ll end up over-trading and possibly losing money. Each trade is unique and there are no clear and precise rules, but the concept of pyramiding and adding to winners is universal. Just BE SURE you are trailing your stop down (or up) to offset the new risk you acquire each time you add a position, or else you’ll be potentially pyramiding your losses, and you don’t want to do that.

Also, never add to a losing trade, traders often make this mistake and it’s a quick way to blow out your account. If a market is moving in your favor you can add to it as discussed above, but if it is coming back against you and moves back beyond the entries of your earlier positions, you should be getting out or your stop loss should automatically take you out.