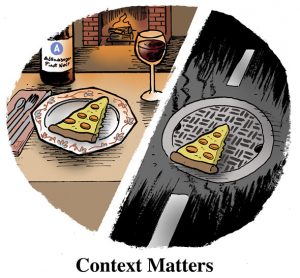 Have you taken what you thought was a ‘perfect’ looking price action signal only to see it ‘blow up’ in your face immediately after entering? Did that leave you confused, angry or desperate to understand why it happened and what you did wrong? Well, there is one huge piece of the price action trading puzzle that if missing, can cause you to feel this way even if you are waiting patiently for what you feel are ‘good’ price action setups.

That piece of the puzzle is the context in which the price action patterns you are taking form within. What I’m talking about when I say ‘context’ is basically the surrounding price action and current / recent market conditions, in addition to the price action signal you want to trade. You see, it’s not just the signal itself that makes a good trade setup, it’s the signal making sense within the context it formed within. In fact, I would even go so far as to say that the context the signal forms within itself is AT LEAST (if not more than) equally as important as the signal itself. A signal that doesn’t make sense in the context of the surrounding and current market conditions, is nothing more than noise.

How to differentiate between ‘bad’ and ‘good’ price action signals

It’s easy to get excited about a particular trade setup in the market while forgetting all about the context it’s forming in. For example, you could have two identical looking pin bars but depending on market context, one could be worth trading and one might not be. Let me explain a little bit about how I differentiate between a good and bad price action setup…

1. Does the signal make sense with the overall market picture? – Is the market trending? Is it in a trading range? Asking yourself what the overall picture of a market is will help you determine whether a particular trade signal makes sense to enter. If you have a very strong uptrend for example, taking a sell signal against that uptrend, even if it’s one you feel looks ‘perfect’, is probably a signal you want to be very very careful with. Most of the time, counter-trend signals fail, and as I always say, you need to be a successful trend-trading before you ever consider counter-trend trading.

If market is range bound, you would then look to ‘trade the range’ as I say, by watching for price action signals near the boundary of the range (either support or resistance boundary). The best type of signal in a range-bound market is one that forms very near or at the boundary and is false-breaking through the level, indicating price will reverse again to the other side of the range.

2. How does the signal fit in to the surrounding market structure? – Meaning what is going on around (nearby) the signal? For example, if it’s a pin bar pattern you’re considering, is the tail sticking out from the surrounding price action or did it just form in consolidation? If it’s an inside bar, is it within the context of a strong trend or is it simply in chop / sideways price movement? If it’s a fakey, is the false-break very clear and obvious and is it in a trend or at a key level?

3. Perhaps most important to ask is; Is their confluence? – Meaning are there any supporting factors for the signal like support and resistance levels, moving averages, 50% retraces, event areas, etc. The more supporting factors a particular price action signal has, the better. A price action pattern without any confluence, sitting in the middle of consolidation, is nothing more than noise to me, even if the pattern itself is very well-defined.

These are the types of questions that will help you determine the context the signal has formed within and ultimately whether or not you really want to take the trade. I may sound cliché, but the best price action signals are the ones that are dead obvious and that almost ‘jump’ off the chart at you. Those signals that you find yourself wondering about and emailing people about or posting on forums about, those are the ones that are probably not very high-probability and thus probably not worth risking your money on.

What to do next…

As you grow your price action analysis skills, you will learn to first take into account what a market is doing; it’s overall condition / state, and THEN you will look for price action signals within that structure; that make sense in the context they form within. I have found that beginners tend to focus too much on the signal itself and not enough on the context; a signal forms and they get all excited and think it’s an automatic green light for a trade, which of course leads to over-trading and losing money.

You should be picky about the trades you take by making sure the trade signal makes sense in the context it’s forming within, and that means you will probably turn down more trades than you say yes to. I’m not saying that you should try to avoid losing trades, because you can never avoid some losing trades, but the very first line of defense for protecting your money in the market is sticking to your trading strategy and only taking signals that agree with it; not those that you’ve justified to yourself for one reason or another.

The ability to be picky about the trades you take is the result of having learned how to trade properly and having mastered an effective trading method. You cannot understand market context and if a signal makes sense (or doesn’t) within it, if you don’t yet know how to read a price chart. If you are a relatively new trader or simply looking to expand your chart-reading and price action trading abilities, you need to check out my price action trading course because it will help you understand market context, price action strategies and how to trade making sure those things are in agreement with one another.