The ‘Ten Commandments’ of Trading 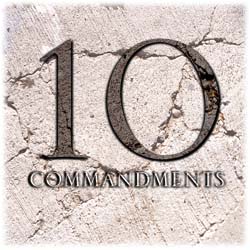 If we sat down and had a conversation about trading in person, I would discuss the following ‘ten commandments’ of trading with you. What follows are ten of the most important aspects of trading that you need to understand, accept and implement if you want to trade successfully and profitably. So, without further ado, here they are…

1. Know what your trading strategy is and master it.

It’s always surprising to me how many people don’t actually even have a trading strategy but still try risking money in the market. If you do not have a strategy that you’re trading with, meaning a trading edge that gives you a better than random chance in the market, you are just gambling and may as well just go to the casino instead.

Furthermore, once you have actually mastered an effective trading strategy, like price action, you have to stick to it, you cannot waffle and jump between trading strategies as many traders do. Trading involves both losses and wins, and you’ve got to be able to have the fortitude to keep focused during the losses. If you jump ship, and abandon your trading strategy after a couple losses, you haven’t given it the proper time to play out and work in your favour, and you will just be on a never-ending, futile quest for a ‘Holy Grail’ trading method that does not exist. Have a strategy, know it, master it, and stick to it.

2. Be honest with yourself.

If you’re drowning in a sea of debt and you really can’t afford to lose any money, you probably should not trade live any time soon (but you can learn and demo trading in the meantime). If you aren’t in a financial position to risk money in the market, you won’t be in a mental position to do so either.

What I mean is, people who are trying to trade but who also can’t really afford to lose any money, are already approaching the market with the wrong trading mindset. You will never be able to let a trade play out or properly absorb losses if you are constantly worried about losing money. Losing money is a part of trading, you will lose and win, and if you know what you’re doing, hopefully you will win more than you lose at years end. But, to do that, you must be in the right frame of mind, and this won’t happen if you can’t afford to trade. Be honest with yourself about this so that you aren’t starting with the wrong mindset.

3. Trust yourself – trust your gut and ignore ‘tips’

Once you learn a solid trading strategy, it’s time to block out the rest of the world. Ignore the pundits on CNBC and other financial media; these people get paid to provide an opinion…an OPINION, not a fact!

I don’t know about you, but I trust my own opinion about whether to risk my money or not, more than anyone else’s. If you don’t yet trust yourself, you will eventually. You just need to get some training and screen time in the market, and over time you will gradually build your own trading skill and gut feel about the market. This is really the only way to ‘beat’ the market in the long-run. This is also why anyone trying to sell you some mechanical trading system is simply full of B.S. and doesn’t know what they’re talking about, or simply doesn’t mind stealing your money. Professional traders trust themselves first and foremost and they don’t give a S%@! What the rest of the world is saying; they only care about what the price action on the charts is telling them.

4. Don’t let the results of your last trade influence your next trade

This one is big. Traders often become overly-influenced by their most recent trade. For example; you had a trade that hit your stop loss by one pip, then went roaring back in your favour. What do you do? How do you react? It’s these situations that make or break you, that separate the winners from the losers, the pros from the amateurs.

A pro trader in this example, will not be affected by such a situation, whereas an amateur will be mad, angry and want revenge on the market. It is true that you’ve got to have ice in your veins to trade successfully, because if you give in to every little feeling and emotion that the market stirs up in you, you will be an emotional wreck of a trader and quickly lose all your money.

The main piece of logic or fact that will allow you to trade with ice in your veins, is that any one trade has a random distribution of being a winner or loser. What that means, is that your winners and losers are going to be randomly distributed across a series of trades, to learn more about this, check out the article I wrote on it here.

For example; if you expect to win 60% of your trades, over a period of 50 trades that means you’re going to lose 20 of them…but you don’t know WHICH 20 will be losers. Therefore, if you have 5 losers in a row, but you haven’t yet lost 20, it’s still within the natural statistical variance of your trading edge and so there’s absolutely no reason to become emotional or do anything stupid as a result of those 5 losing trades. It can be tough to remember this in the ‘heat of the moment’, but if you don’t, you will probably give in to those emotional impulses that drive you to make stupid trades, and lose money as a result.

5. Control losses, do not avoid them

I get emails from traders every week who are clearly trying their hardest to avoid losses. They tell me they aren’t trading with stop losses or ask me “why a perfectly good trade setup failed?”

The truth is; you cannot avoid losses in trading. So, learn to control them through risk reward and money management. The sooner you do this, the easier your life as a trader will become. If you try to avoid losses, you may do it for a while, but when you do inevitably have one, it will be big and bad, and cost you a whole lot of money.

Trading is about controlling losses and containing them under a certain 1R dollar amount per trade; not avoiding them altogether, because that is an impossibility.

6. Preserve your trading capital for the ‘easy prey’ trades

Too often, traders waste their trading capital on trades that either don’t meet their trading strategy criteria, or are very poor setups. One of the most important ‘rules’ of trading is to preserve your capital so when the obvious setups come along, you can ‘jump’ on them like a trading predator and get the most from them.


This means, you shouldn’t be in the market all the time. In fact, most of the time you should not be in the market, but you should be observing as a ‘bystander’, waiting for those ‘easy prey’ trades to form. Then, when they do, you have plenty of money in your account to take advantage of them since you didn’t waste it all on poor trade setups.

7. Be excited about trading, not about money

To excel at anything in life, you have to be passionate about IT, not about what it can do for you. Trading is no different; you must love trading and love looking at charts and price action to become a good trader and eventually make money. Professional traders make money AS A RESULT of their love and passion for trading, not because they ‘want to make a lot of money’. Therefore, you need to put your focus on learning to trade properly and becoming the best trader you can be, not on ‘making money’.

Too often traders jump into the market with no plan. They have no risk management strategy, no exit strategy and often even just enter on a random ‘gamble’, with no entry strategy.

Before you enter a trade and risk your money in the market, you should first know what your per-trade dollar risk amount is. You do not exceed that amount at risk at any time.

Next, you need to know what your entry is and when you see it, you can enter, but only then. Don’t jump in when your entry signal or strategy is not present, this is called gambling. Before you enter, you need to plan where you’ll exit or at least plan your trading exit strategy. You might end up deviating from this strategy depending on market conditions, but it’s important that you have a plan of how you’d prefer to exit a trade and not deviate from that unless you really feel compelled to by a dramatic change in the price action as the trade unfolds.

If you just randomly jump in the market with no risk, entry and exit plan, you will end up losing money for a whole number of reasons such as over-trading, over-leveraging, not taking profits / letting winners become losers, etc.

You aren’t going to become a full-time trader in six months, probably not a year, maybe not even five years. I hate to be the one to break this to you, but someone has to. You need to be realistic if you want to succeed at trading. I consider ‘succeeding at trading’ to mean making money over the course of a year, but if you have a small account, you aren’t going to get rich quick, nor should you be concerned with doing so. Your goal at year’s end should be to have made a profit, if you did that, then you can consider that a successful trading year. Obviously, some years will be better than others.

Furthermore, the trading mindset required to make money, is one of being focused on learning how to trade properly, not on ‘getting rich’, profits or rewards. Making money at trading is the end result of being realistic and doing a lot of things right, consistently over time. It doesn’t happen just because you want it to. People often assume trading is an ‘easy’ way to make money, but like anything else, it takes time, effort, dedication and passion to the craft. A professional sports player makes a lot of money, but only because they are sickeningly passionate about their chosen field. Thus, the passion and mastery is something you must possess before the money will come, in trading as with anything else in life.

Whether you’re a total beginner or you’ve been trading for a while but never really had any real training, you need it. Trading education is the foundation of your trading career, without it you will basically be wandering around in the dark hoping to stumble upon the right path. I am always surprised how many traders are willing to lose money in the markets before they’ve actually learned how to trade. Take the time to learn and make a small investment in your trading education if you want to give yourself the best shot at becoming a successful trader. To learn how I trade with simple price action strategies, check out my trading course here.