Is Your Stop Loss Too Tight ? 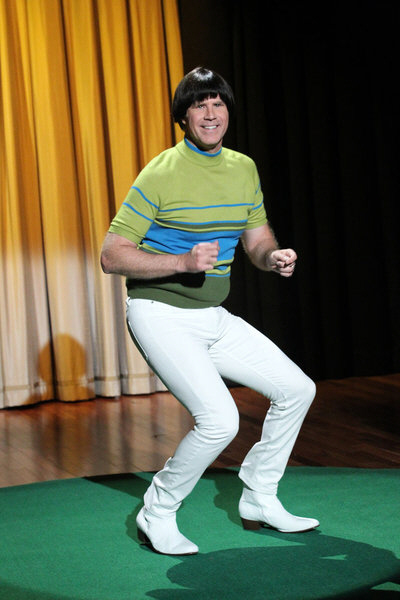 After more than 15 years of trading and having talked with over 20,000 members of my price action trading community, it’s clear to me that many traders can successfully call the direction of the market, however, they often get stopped out of their trades way too soon, sometimes right before the market reverses in the correct direction, sound familiar???

The reason this usually happens is because traders place their stop losses too tight or too close to the current market price. Thus…

When it comes to stop losses, size matters…

Before we really get into the ‘meat’ of today’s lesson, I just need to say that tight stop losses have their place in some forms of trading and some market scenarios. But, today I want to focus on daily chart trading and longer trade hold times of days to weeks (position trading), which is my main style of trading and what has made me the most money over the years.

I want to start by discussing the fact that markets move an average range each day and week, this is a fact that is reflected via the ATR or average true range indicator, which is something you can apply to your charts in the metatrader 4 platform. When focusing on the daily or weekly charts, we need to be aware of this ATR range, mainly so that we can make sure our stop loss is placed outside of it. It literally makes no sense to have a stop loss inside of this range because it means we risk being stopped out simply due to the normal day-to-day fluctuations in price volatility.

In the chart example below, we can see that: 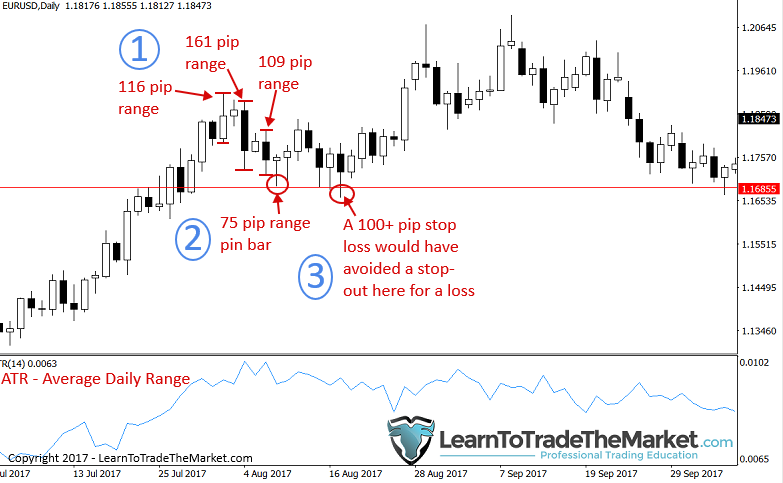 The daily chart produces powerful signals, but as I say often, trades take time to play out. So, if trades usually take time to play out in our favor, then if our stop is too tight we risk it being hit before the signal starts to pay off. Have you ever seen the market chop around for days or weeks or even move down towards the stop level and then quickly snap back the other way? It happens a lot as you probably know, and you want to avoid being stopped out prematurely when this happens…. 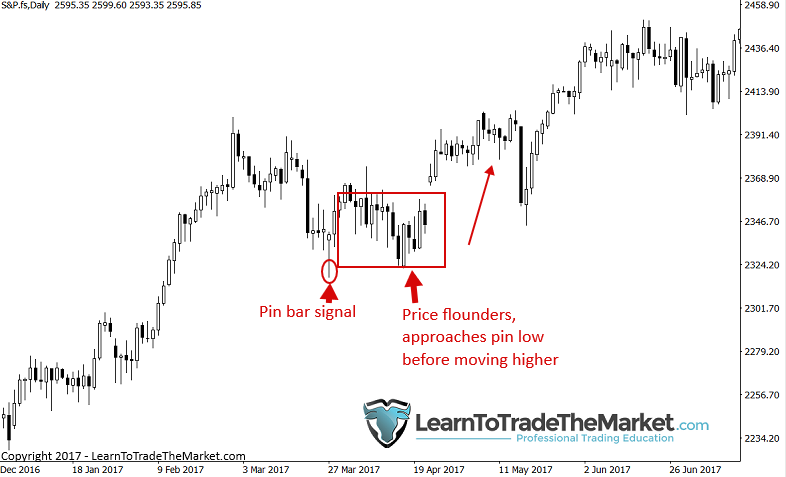 Moving on, it’s important we set our stop loss beyond areas or levels on the chart that the professionals, like banks and larger players, may try to squeeze us out of. This will usually show itself by a sharp move below the highs / lows of the tails of candles or key swing levels. For example, often you will see price just barely violate the tail of a clean pin bar signal before reversing back in the direction of the pin bar trade. In the example below we can see this, note the pin bar and then the move lower a few days later, which would have stopped out many traders for a loss just before moving higher again. For this reason, it’s good practice to put your stops outside of the ATR (as mentioned above) and a safe distance beyond a pin bar’s tail, not simply one pip above or below. 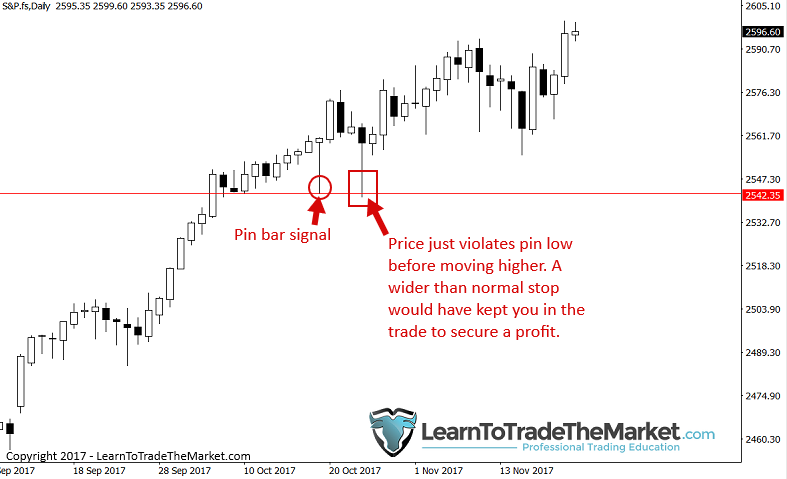 Traders often place stop losses at arbitrary places on the chart just for the sake of having a stop in, with no real rhyme or reason to where they placed it. This is bad. A stop loss should ALWAYS be based on logic and strategy, i.e., an area or level on the chart that nullified the trade signal, such as, above or below the signal highs or lows or beyond a key chart level such as horizontal resistance, a swing point or even a moving average.

With a wider stop loss, you will not only stay in good trades and not get stopped out before they move in your favor, but you will also give the market a chance to give you a real exit signal rather than being taken out of the trade at an arbitrary point.

By doing this, we achieve 2 things: One, the market has room to move and Two, the market has plenty of space to produce an opposing signal or pattern that can lead us to exit the trade with a smaller loss or even a profit.

In the chart example below, I have put the ATR on. It shows that at the time of the pin bar entry buy signal, the ATR was near 100 pips. As I said earlier, you want your stop outside of the ATR, so in this case it would be a stop greater than 100 pips, which would have kept you in this trade even after price violated the pin bar low. It went on to become a winner and even produced a counter-trend pin bar that you could have used as an obvious exit point. 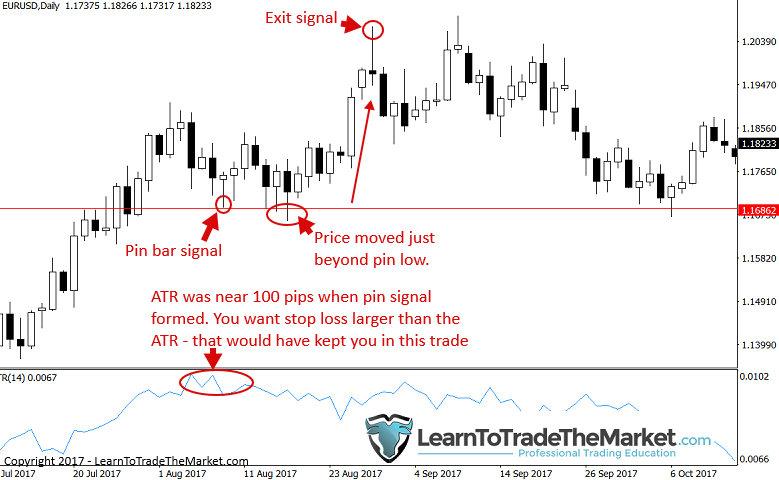 MYTH: One MYTH about larger stop losses that I need to be sure and dispel before I end today’s lesson, is the myth that says wider stops mean larger losses. Many beginning traders think this and it’s simply because they don’t understand position sizing. You will need to adjust position sizing of trades as you adjust your stop loss, in this way you keep your dollar risk constant.

Perhaps the most beneficial aspect of wider stops is that they give your trades time to play out, as most traders are usually right with the market direction but wrong on stop losses. Meaning, the more space you give a trade (wider stops) the more time you are giving the market to potentially play out in your favor. There’s nothing worse than being right about the market but wrong on your stop loss placement, resulting in a loss that should have been a win!

Any trader out there who has been around the block for any significant period will tell you that trade entry and trade management go together to form a successful long-term trading approach. The ‘wheels’ will fall off the wagon if you neglect one or the other. Stop loss placement doesn’t need to be stressful, if anything, it should reduce your stress because if you do it correctly you can go about your daily business without worrying about every up and down tick of the market.

My courses focus on not only finding trade entries but much more, including placing stops and target levels to manage risk / reward effectively and how to bring it all together into a comprehensive trading plan. My approach to trading is to simplify, but not just for the sake of simplicity, it’s primarily because simple is better regarding all aspects of trading and it’s what leads to profitable trading. From trade entries to stop loss placement, risk management and psychology, the simple, minimalistic approach is what works.

PLEASE LEAVE A COMMENT BELOW & GIVE ME YOUR FEEDBACK…

Any questions or want to talk ? Contact me here.