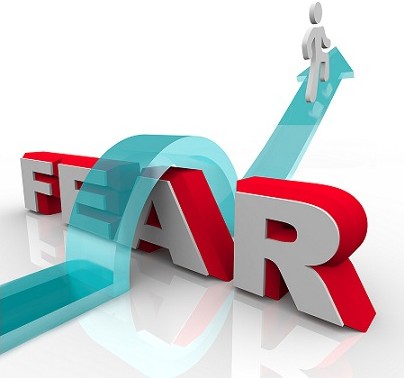 If you’re going to be a trader, you’re going to lose money at some point, and in case you are still in the phase of trying to avoid all losing trades and searching for a “Holy-grail” trading system with a 75% strike rate, you should forget about all that right now. As cliché as it may sound, losing really is part of winning as a trader; the two are inseparable. If you don’t learn how to lose properly you will never make consistent money as a trader.

Reality check…ALL pro traders lose money, and they understand that it’s just part of the “game”. Sadly, for many traders, every trade is accompanied by a tremendous FEAR of losing money and sometimes intense emotional attachment.

Some of the key reasons why traders become fearful about losing their money include the following:

1. They don’t understand that mathematically, over a series of trades, a trader can lose a majority of their trades and still be widely profitable, simple math proves this.

2. They are simply fearful of losing money in general.

3. They are trading positions that are too big (risking more than they really should be), causing fear, sleepless nights and huge emotional swings.

Fear of losing money can be a good, natural emotion, but we need to transform its focus.

Fear of losing money is a good emotion to have in many areas of life, if we did not have it there would be even more chaos in the world and in the markets. Humans are protective of their acquired wealth and property, and rightly so; they worked hard for it.

However, in trading, this natural energy to be defensive and emotional with money needs to be transformed and refocused into a different mental state…

Instead of being fearful of losing your money when trading, embrace the control you have on each trade; a trader has complete control over the risk management of every trade via stop losses and position sizing, [and for more advanced traders, derivatives and hedging mechanisms (not discussed here)]. These risk management tools are your way of being in control of your money/funds, and instead of being “fearful” about losing money, you should feel empowered and confident because you can predetermine how much you are comfortable with potentially losing BEFORE you enter a trade by using these tools.

However, just using these tools to control your risk per trade is not quite enough to totally remove the fear of losing.

Ask yourself some serious questions

If you feel fear or any emotion at all when you place a trade, you need to “slap” yourself in the face and ask yourself 3 big questions (and answer honestly):

1. Do I really have the knowledge and confidence to be trading with real money in the first place?

If you’re trading your hard-earned money in the markets but you don’t know what your trading edge is and you don’t have 100% confidence in your ability to analyze and trade the markets…you probably should not be trading. One of the biggest reasons traders become afraid to lose their money is because they aren’t confident in their own ability to trade! It seems silly I know, but it’s very true; many traders simply don’t have a trading strategy mastered, they don’t have a trading plan, trading journal, etc…they simply aren’t prepared to risk real money in the markets yet…thus they feel fear when they trade.

2. Am I trading a position size that’s too large for my personal risk profile / per-trade risk tolerance?

If you don’t know what your per-trade risk tolerance is, then you need to figure that out first. It’s basically just the dollar amount that you feel like you are 100% comfortable with potentially losing on any trade; because you CAN lose on any trade…remember that. You have to take into account your overall financial situation and then determine how much money you should realistically and honestly have at risk in the market on any one trade…be honest with yourself here. You’ve got to think of yourself as a risk manager and as someone who is managing funds, rather than just a small-time guy trying to get lucky; your trading mindset will directly influence your trading results.

3. Do I truly understand the math’s behind trading?

When I say the “maths behind trading” I am mainly referring to risk reward and how it relates to your overall winning percentage. For example, on a series of 20 trades, you are likely to lose at least 35 to 45% of the trades, and most traders who are successful lose anywhere from 40 to 50% of the time, some even up to 60% of the time. But, through the power of risk reward you can lose more than you win and still come out very profitable. We will expand on this below.

Embrace the belief that losing is OK

Losing is good if you’re cutting your losses quickly and understand that by doing so you’re simply preserving capital and that your winning trades will pay for your losing trades with profit left over. This is the power of your average risk reward ratio over a series of trades coming into play; we will see this in action below…

Even very profitable traders typically lose more than they win, to prove this point let’s take a look at a case study showing 14 trades with a just a 43% win rate. To be clear, that means you are losing 57% of the time and winning just 43% of the time. It can be hard to associate “losing” the majority of your trades with making money, but as I discussed in one of my recent articles, you don’t have to be right to make money trading.

This image shows us that profitable traders can lose more trades than they win and still come out very profitable over a series of trades. Thus, losing money on any one trade should not concern you: 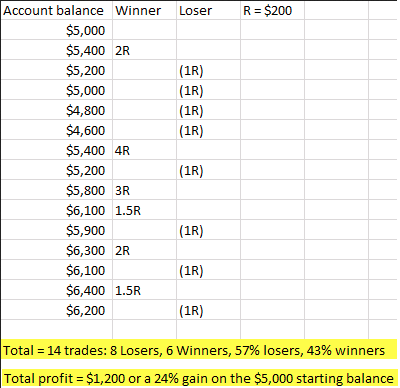 Trust your strategy and Trust the maths

As we can see in the hypothetical track record above, the math shows us that even while losing 57% of our trades, if we let our winners run to around 2 to 1 or better and cut our losses at -1R or less, the profits will take care of themselves. It’s worth noting we included a couple of 1.5R winners, because sometimes it will make more sense to take a reward of slightly less than 2R, depending on market conditions. The average risk reward in this example was 1:1.75, and if you can aim for an average risk reward of around 1:1.5 or 1:2, over the long run you should come out ahead. The “secret” is keeping ALL your losers at 1R or less and ONLY trading when our price action trading edge is truly present.

If you follow an actual plan, losing is easier to accept, because at least you had a plan and a roadmap as to what you were trying to do; the brain then sees it as more logical and thus you’re less likely to experience apprehension or fear. The set and forget concept I always talk about will assist with training your brain into accepting losses. You will also avoid interfering with a lot of your trades which can produce unnecessary losses.

Everything we said above is accurate and important, but there really is one simple “fear test” that I have found to be very effective for most traders. That test is simply to gauge how you feel at night before you go to bed while you have a trade on. If you find that you can’t stop thinking about your trade(s) or you are glued to your computer screen while you should be sleeping, you are still experiencing fear of losing. So here’s a very simple test for you:

2) Or, you have no idea what you’re doing and lack confidence in your trades 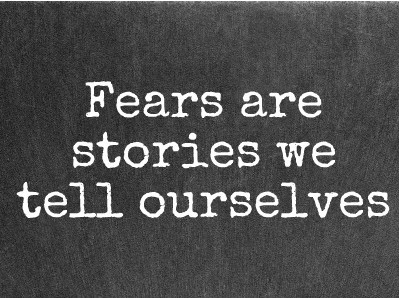 The fear of losing money or of losing a trade can be crippling to a trader, causing them to miss out on high-probability trade setups, second-guess themselves constantly and it can even cause them to be unable to sleep. Clearly, if we are to succeed at trading we have to conquer this fear. Conquering the fear of losing money and trades starts with acceptance; we have to first accept that we are going to lose money and have losing trades, even if we try to avoid them. Thus, there is no sense in “trying” to avoid losing trades, instead we have to learn to roll with them and contain them. We do this by following through with the concepts we discussed above, so let’s sum them up briefly:

• Mastering our price action trading strategy and “trusting” it: master it, own it and believe in it.

• Manage your money and employ solid risk management; this means cutting losses at 1R or less and aiming for a decent risk reward of about 1:2 on each trade. We also need to try and let some winners run to get larger risk rewards like 1:3, 1:4 or more.

• Trust the math: remember the example track record above and that even a 40% win rate can make very good money with an average risk reward ratio of approximately 1:1.5 or more.

To learn more about the above concepts and to get on the track to conquering your fear of losing money in the markets, checkout my Forex trading course and members’ community.