How to Not Lose Your ‘Shirt’ Trading 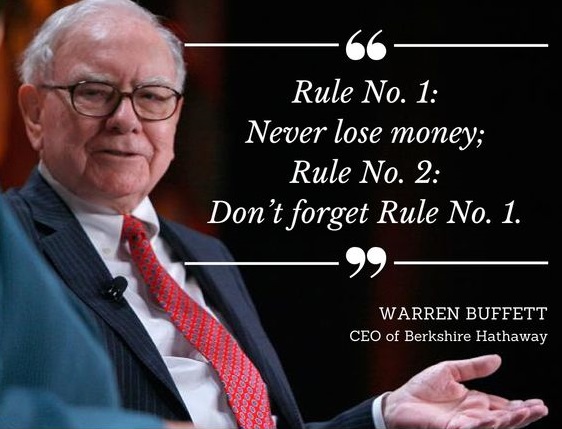 A lot of people want to learn what to do to make money in the market and I’ve written a plethora of articles on that topic. From trading strategies to money management, to how to perfect your entry into the market, I’ve written extensively about the various aspects of making money trading.

However, what a lot of people need to know is not just good trading offense, but good defense as well. Good defense is much more important for a trader than good offense. I’ve also written about this topic of defense in trading, but not as much as the ‘offense’ of trading. So, today, due to several emails I’ve received over the years, I thought this might be a good topic to help beginning and seasoned traders alike. Let’s discuss what I do to avoid giving back profits and losing money to the market.

The number one thing you can do to avoid losing large sums of money to the market, something that is 100% within your control, is not manifesting trades out of thin air when there simply is nothing to trade.

The longer you look at your chart to try and make sense of it when there simply is nothing to trade, the higher chance you will lose. A good trade should jump out at you without having to stare at the charts for 30 minutes to see it.

If there’s nothing there, don’t trade. Staring won’t help a trade form. If it’s not there, it’s not there. No signal, no trend, just avoid it.

Also, avoid trading choppy markets because it is these market conditions that often cause traders to manifest trades that aren’t there. Good, obvious trades, form in trending markets and (or) from key chart levels, not in sideways chop.

The market is guided by levels and if the market you’re looking at isn’t clearly demonstrating that it’s respecting levels then it may be best to stand aside for a while. If you’re in a friendly market, this will be obvious, if you’re not in a friendly market things will be quite haphazard and choppy. The market will tell you what it’s doing around key levels; breaking, holding, re-testing etc.

If you want to avoid losing your shirt, pants and the whole farm to the market, re-read this section again and follow the wisdom consistently.

The chart below is an example of sideways and very choppy price action that would be better left alone, rather than lose your money trying to trade it: 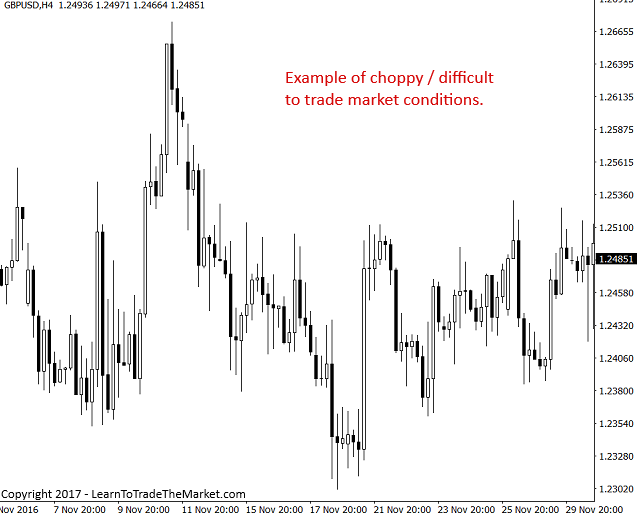 Please don’t brush this off as just another cliché statement on money management: Every single person including myself at times, has risked well above their purse limit. Whether it’s adding to a position, risking too much per trade or just being greedy, if you want to survive in the market, you must start thinking about the money as if it’s real and in your hand. You must determine your set amount per trade, your initial trading capital and until you can prove to yourself that you are successful for a period of time, these parameters and dollar amounts should not change under any circumstance.

If you sat down and said your risk per trade is $100, don’t change that until you’ve had a period of success because there’s just no logical mathematical reason to do so. There’s no point in trading if you don’t aim to make at least a 1:1 risk reward per trade or greater (ie: targets need to be wider than stops). You would be surprised how many people don’t even understand that basic concept.

Another big reason so many traders lose so much money, is that they give in to the allure and temptation of day-trading. What day-trading is, is over-trading. I have written many articles on the perils of over-trading, but since it’s such a big reason traders unnecessarily lose money in the market, it’s important to discuss it again…

I believe in and teach a low-frequency trading approach. You must let your trades play out without interfering, because trades often take longer than expected to play out. Markets will often go further than we think, and the only way to get on-board big moves in the market (which is what makes you a lot of money), is by being patient and leaving your trades alone.

The only real chance a smaller retail trader has (like you), is patiently waiting for obvious trades to set up and then taking a decent size position that you hold for a period of days or even weeks. Trying to day-trading, dodging in and out of the market multiple times a day, is a fool’s game that will leave you frustrated, angry and broke.

The proper trading mindset is one of neutrality. You must not become attached to any trade or position you enter. You must TRULY not care if a trade wins or loses. Once you start caring, you start getting emotional and that leads to trading mistakes like over-trading or risking too much.

Money management has the biggest effect on your emotions. What I mean is, managing your risk is the most powerful tool that you can use to make sure you remain neutral. You must determine what your dollar amount is that you can risk and be mentally OK with losing. If you get attached to a loss or win, trading will become an extremely difficult game where you feel like you’re constantly losing. Trading is essentially a game of math, by that I mean, risk reward; making sure your wins are greater than your losses. For the most part, if you apply logical entries, proper mathematics (risk management) and a neutral mindset, you do stand a chance in the competitive sport we call market speculation.