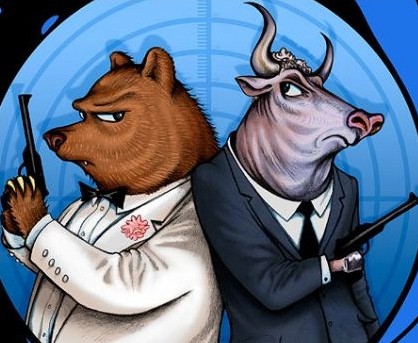 Trading conditions have been good for Forex price action traders over the last couple months; let’s take some time to review some of the great setups that occurred in the various major FX pairs recently. When conditions are good you will see nice follow through on many price action setups, this puts the probability of any one price action setup working out even more in our favor than it otherwise would be. It is at these times that savvy price action traders should be taking advantage of what the market is offering, think of it like perfect sailing conditions; time to put up the sails and fill them with wind to get to your destination quicker.

The EURUSD fired off a solid 4 hour sell signal on 8/6/10 that had confluence with the long-term resistance on the daily chart. As we can see in the daily chart below there was a strong horizontal level running through the 1.3260-1.3360 price area, we discussed the importance of this level in the commentary from 8/9/10. Once price ran into this old support / new resistance level and formed a well –defined 4 hour pin rejection candle the setup had enough factors lining up to enter short, even though it was counter-trend at the time. This is how to trade price action counter – trend; it can be done but it needs to have confluence of higher time frames, such as a well defined price action setup at a major market horizontal level or swing point, like we see in this example: 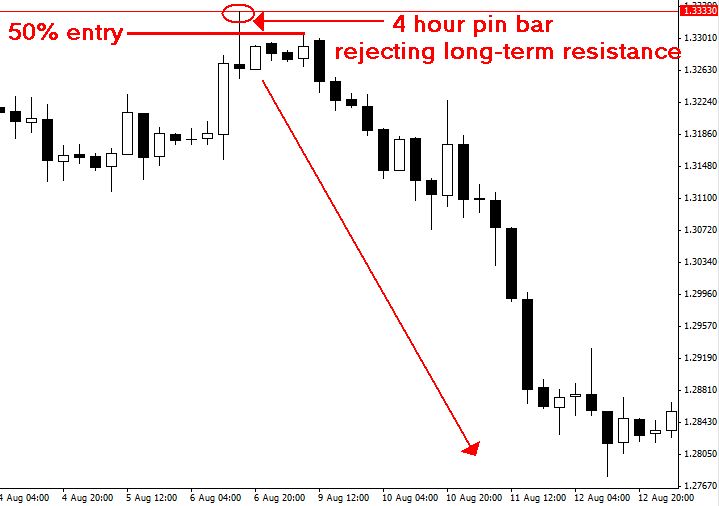 The AUDJPY has formed a couple nice daily inside bar setups over the last 2 weeks. The first one occurred just under resistance near 77.60; this was a strong horizontal level and as such provided traders with an obvious level to place their stop loss beyond. Traders who missed the first inside bar setup were provided with another opportunity with an inside / pin bar combo setup that formed on 8/23/10. This setup resulted in a nice move down to the bottom of the trading range near 73.62 and a very nice risk to reward ratio. Both of these setups are fine examples of how to trade a market that is range bound, in this case trading from an area of resistance to an area of support. 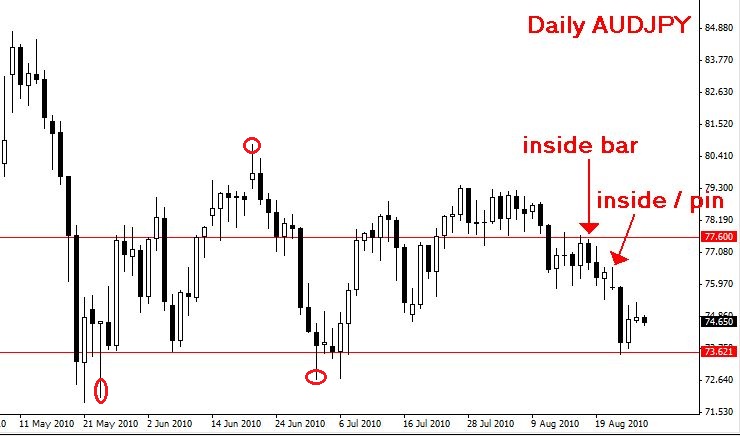 The AUDUSD formed a fakey setup a few weeks back that resulted in the most recent move to the down side. This developed near major AUDUSD resistance around the 0.9200 level. Once the low of the mother bar was broken the setup would have been entered as a sell and has since resulted in a move down to 0.8920 support and now this market appears headed lower still with a bearish 4 hour pin bar setup forming at the time of this writing. 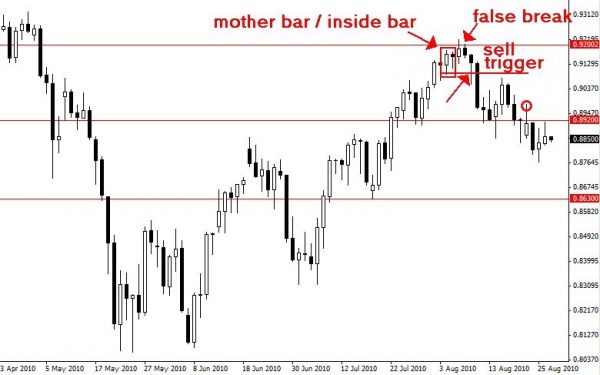 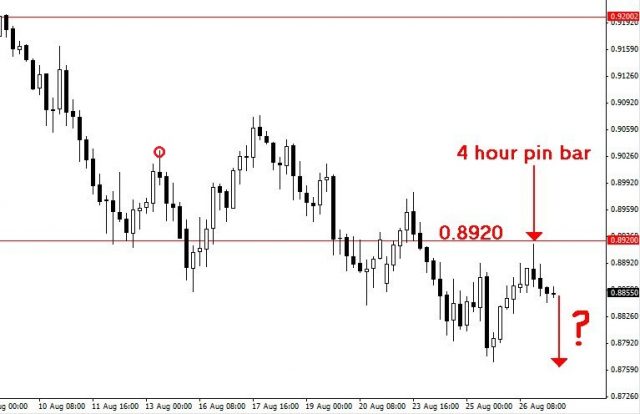 The NZDUSD formed a well defined pin bar back in late July near the strong resistance area that begins around 0.7300. As we can see in the chart below price has since fell lower by over 300 pips and looks to have more room to fall to the downside. Trader’s who may have missed the original sell entry were given a 2nd chance to sell short as price rallied back up to near the pin bar 50% level 4 days after the initial pin bar break down. Note also the failed pin bar in the chart below..they don’t ALL work out. 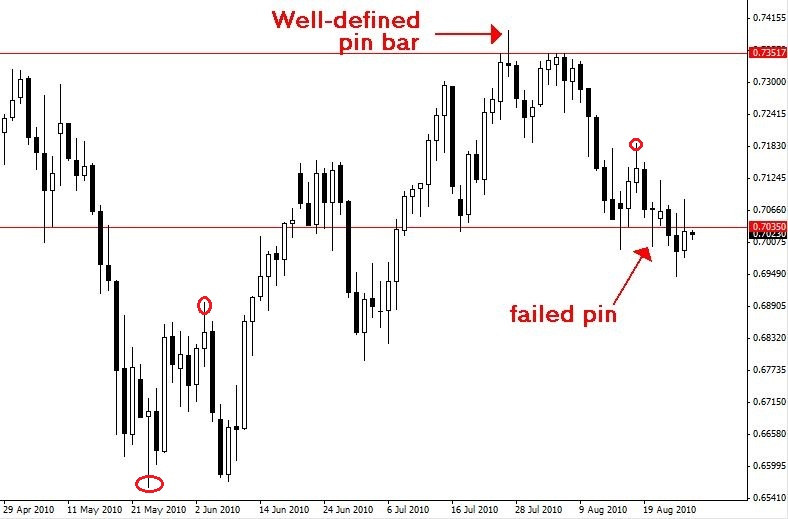 The USDCAD formed a solid bullish pin bar reversal as it crashed into and then rejected support near 1.0150 on 8/5/10. We can see in the chart below that since this bar formed at this obviously strong support level price has rallied back up to the top of the trading range resistance just beneath 1.0700. There was also a pin bar with the market momentum that did not work out, as we can see in the chart below. 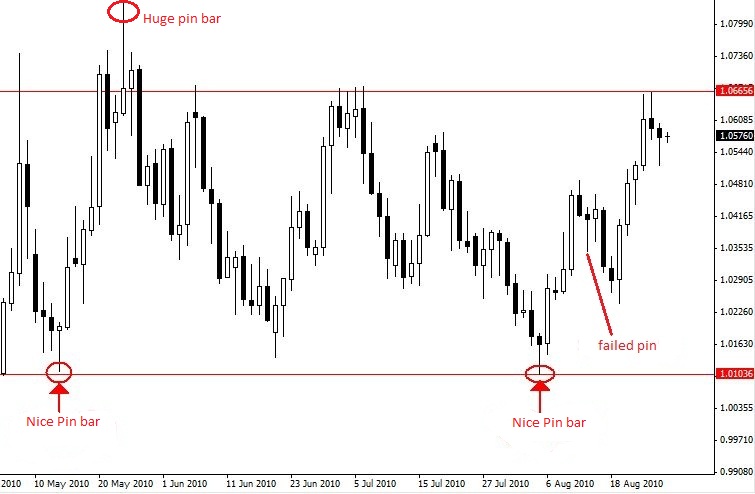 Gold has given traders a few great price action setups over the past few weeks. The first one was a nice fakey setup that formed just under 1210.00 resistance. The entry trigger for this fakey was the breakout above the mother bar high just above 1210.00, traders also could have entered on the retracement of the pin / fakey bar with a stop just below the low for a very tight stop with large reward potential.

We can see the second setup developed just this week and was a large bullish pin bar that showed rejection off 1210.00 support. Price has since come off modestly to the upside and appears to have room to run upwards into the next major resistance level near 1260.00 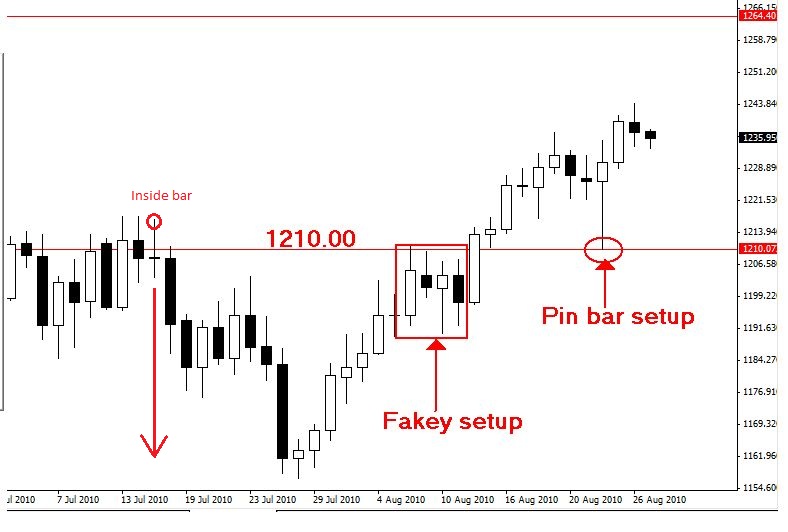 Recently gold also formed an inside bar setup which again came off in the direction of the overall bullish momentum. We can see in the chart below this inside bar broke above its mother candle and the market looks to have more room to push higher until resistance thickens near the previously mentioned 1260.00 level. 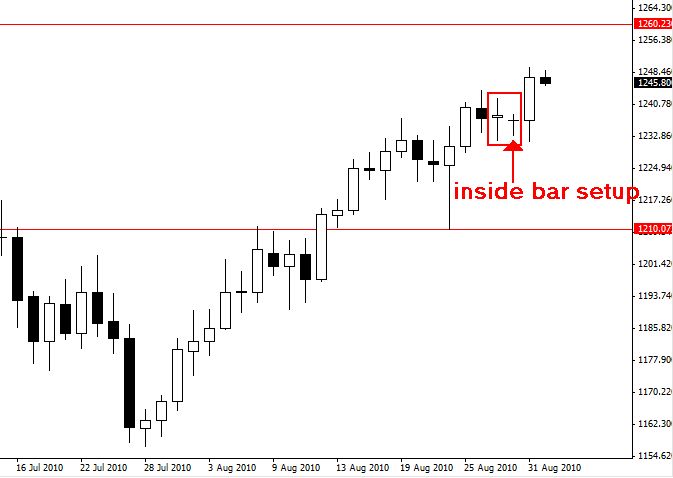 While there are usually at least a couple decent price action setups each week across the various forex currency pairs, there are times that we can see a greater quantity of high-quality price action setups forming. It is at these times that we really need to take advantage of market conditions and our knowledge of price action trading to build our trading accounts. The problem that many traders face is overtrading during market conditions that are less conducive to quality price action setups, as a result of this behavior many traders end up giving back most or all of the gains they made as they took advantage of higher-quality price action trading conditions. The lesson to take away from this article is that you have to learn to sit on your hands sometimes and not try to force a trade setup that simply isn’t there. The best price action setups are obvious and essentially jump off the chart at you. It is ALWAYS better to be flat the market than to be in a losing trade that was a result of over-eagerness to trade, also known as GREED.