A Guide On ‘Taking Profits’ From Your Forex Trades 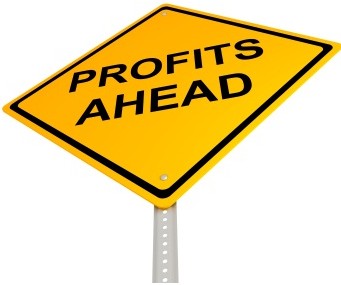 If you’ve been around the markets for a while you probably have figured out that it’s one thing to get into a profitable trade and it’s another thing all together to actually take a profit from it. Traders often screw up the process of profit-taking due to emotion, not having a profit-taking plan, or simply not knowing how to read the changing price dynamics of the market.

In today’s lesson, I am going to give you some examples of recent price action trade setups that provided the potential for a nice profit, and then I’ll explain to you how you could have secured that profit. I will also discuss some of the common mistakes that traders make in trying to take profit out of the market. Hopefully, after finishing today’s lesson you will have a better understanding of how to secure open profit when trading the markets and how to avoid some of the most common profit-taking mistakes.

A fact of Forex trading is that most traders take their profits as a result of an emotional impulse instead of exiting the market at a pre-determined target or from a pre-planned exit strategy. As a result, traders who exit a trade on emotion typically take much smaller profits than they would like, while traders who exit a trade based on logic and discipline typically are very happy with the profits they take.

There is also an element of being realistic here that I need to touch on before going into the examples below. You see, struggling traders who exit emotionally tend to think they are going to somehow squeeze every last pip out of a move and this causes them to have difficulty closing a trade that has moved into a nice profit. Successful Forex traders who know and accept the fact that they cannot take every pip out of a move, are more than happy to settle for taking ‘chunks’ out of moves and exiting their trades when they are significantly in their favor, instead of panicking and exiting at the last minute as the trade comes crashing back to their entry.

Look at the British pound vs. U.S. dollar chart below, I have provided an example of exiting based on emotion because you waited too long due to thinking the trade would go just a ‘little bit further’, vs. exiting based on logic because you don’t care if the trade keeps going since you know and accept that you are extremely unlikely to pick the exact top and bottom of every move:

From the chart example above we can take away a very important point and build it into our Forex trading plan:

When we get up 1:2 times our risk in a trade it’s time to either lock in that profit, take it off the table, or at the very least analyze the market structure and ask yourself if you honestly believe the market will continue in your direction before making a significant correction against your position. Remember: markets do not move in straight lines, instead they ebb and flow, as short-term swing traders our aim is to take chunks out of major market moves, not pick the exact top and bottom, so don’t get caught in a cycle of constantly giving up solid 1:2 risk reward gains or more only because you are stuck in a perpetual state of greed and hope.

Let the market take you out

Traders often exit the market because they ‘think’ they know what is going to happen. You need to understand that you never know for sure what will happen next, you have to trust your trading edge and then let the market play itself out. Forex trading is a game of risk and reward, and since there is risk involved with every trade you take, you need to accept that risk and look at it as the price of being a trader, and embrace it. The more you fight against the inherent risk of being a trader and try to close your trades out early, before they hit your pre-planned stop, or perhaps not even use a stop loss because you are ‘sure’ the market will turn back in your favor, the greater the chance of you losing a lot or all of your trading money.

If we have a high-probability trading edge like price action Forex strategies, we need to let our edge play out over a large series of trades to see it work for us properly. When you manually close a trade just because it moves against you a little bit, you voluntarily interfere with your trading edge. You see, you don’t know if that trade is going to turn around in your favor and hit a 1:3 risk reward winner, or continue moving against you and hit your stop loss. So, you need to give yourself a chance on every trade you take by letting the market play itself out. The best course of action is almost always to set and forget your trades and either take the loss from the risk that you accepted prior to taking the trade, or take a nice profit if the trade moves in your favor. Of course, this largely depends on your ability to find and enter high-probability Forex trades, because if you over-trade and enter the market on whims, you aren’t going to last very long in the markets, no matter what your exit strategy is.

How to take profit in a trending market

A strong trending market provides us with the best opportunity to hit some big winners by letting our trades run via trailing our stops. There is no perfect way to trail your stop loss, and I do get a lot of emails asking me how to trail stops. 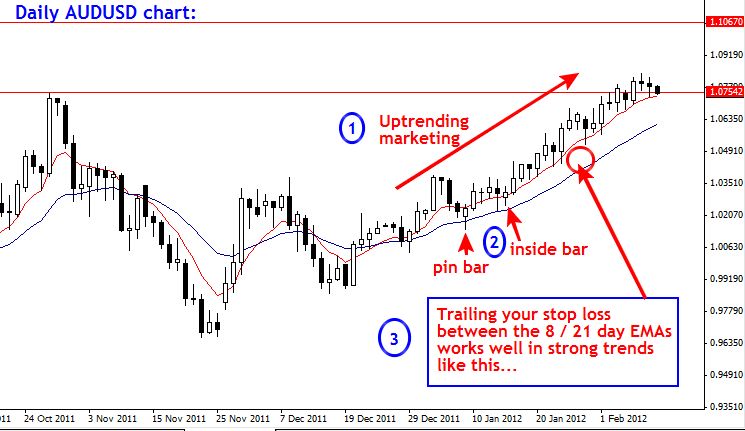 How to take profit in a range-bound market

Taking profit in a range-bound market is pretty straight forward. Typically, you can watch for price action setups at one boundary of the trading range and then take profit near the other boundary of the range. See this example chart for more:

How to know when to take a 1:2 or 1:3 risk reward profit vs. trailing your stop

I get a lot of emails about how to know when to take a 1:2 or 1:3 risk reward vs. when to trail your stop. The simple answer is that there is no way to ‘know for sure’, because we can’t ever know anything ‘for sure’ in the markets. But, generally speaking, in strong trending markets we obviously have a better chance of getting a big winner through letting our trade run by trailing our stop. So, knowing when to take the 1:2 or 1:3 profit off the table vs. trailing your stop, really comes down to your ability to accurately read the market conditions. Also, there is nothing wrong with moving your stop up to lock in a 1:2 or 1:3 risk reward and then trailing your stop up each time the trade moves 1 or 2 times risk in your favor; this way you take the profit and also give yourself a chance at a bigger gain.

Becoming a master price action trader by learning to trade like a sniper and not a machine gunner, will allow you to identify high-probability price action entries as well as build your market analysis skills. Knowing how to effectively analyze the price action and current market structure prior to entering a trade is paramount to figuring out the best and most logical way to exit the trade. While there are no guarantees in trading, one thing that can be said with certainty is that learning how to correctly read and trade off the raw price dynamics in the market will significantly improve your ability to both enter and exit the market effectively. If you want to learn more about learning to read and trade with price action analysis, check out my Price Action Forex trading course.