Forex Fundamental Analysis: What You Need to Know 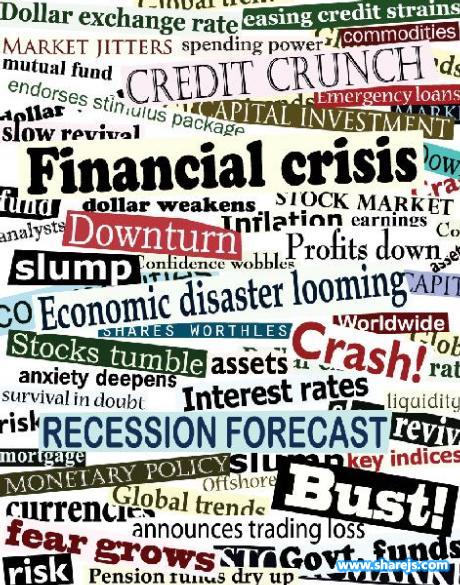 Forex fundamentals and Forex news are essentially economic variables that can be thought of as catalysts for price movement in the Forex markets. The school of thought known as “Forex fundamental analysis” essentially says that a trader can predict future price movement of a market based on a market’s fundamentals or news data. Whilst it seems perfectly logical to assume you can study the economic fundamentals and news of a market and make predictions about it’s future direction based on this data, it’s not quite that simple.

Have you heard the old saying “Buy the rumor, sell the fact”? There’s a reason this saying has been around on Wall Street for hundreds of years, it’s because when market data comes out, it typically has already been factored into the market and it’s impact will thus be minimal once it finally is released. Traders and investors tend to operate on expectations of what might happen in the future, based on some news data or fundamental analysis, that’s where the ‘buy the rumor’ part comes in at. The tricky aspect of this is that we can never know for sure exactly how much of any piece of impending economic news has already been acted upon / factored into the market vs. what will actually happen when that data is released. For these reasons and more, I give very little attention to upcoming Forex news data and fundamental analysis in general. Everything that affects a market, from Non-Farm Payrolls to GDP to interest rate decisions to natural disasters and political unrest, can all be seen much more clearly and effectively by analyzing the price action on a raw price chart.

Price action reflects all variables that affect a market

Perhaps the most important thing you should take away from this lesson is that the raw price action of a market is a direct reflection of every variable that caused that market to move. In fact, one daily bar on a daily price chart is the end result of all the day’s thousands of economic variables that influenced the market. There are literally thousands of variables that can cause any one market to move on any given day, but just because these fundamental and news variables are the catalysts for price movement in a market, does not necessarily mean trying to analyze them is useful or even relevant for short to mid-term Forex traders.

Most of the time, when a big economic news event is on the horizon, like an FOMC policy meeting or Non-Farm Payrolls, traders and investors are already speculating on what its outcome will be for weeks or months before it actually happens, and the end result is that the actual event itself is already factored into the market when it occurs, and so it’s really more of a non-event. There will usually be increased market volatility during these big news events, but being focused on the higher time frame charts like I am, this intra-day volatility is really nothing I am concerned about. If there’s a strong daily chart trend in place, I am much more concerned with that, and I will actually use any counter-trend retraces that occur as a result of the news to look for price action signals in-line with the daily chart trend; this is the essence of how I ‘trade the news’, so to speak.

In the chart below, we can see a GBPUSD daily chart and that on December 18th the market surged higher shortly after the FOMC meeting announcement. Now, the important point to consider here is that traders and investors had been discussing this announcements “potential” for weeks leading up to it, and that the GBPUSD was ALREADY trending higher for a long time before this. The announcement itself was actually somewhat positive for the U.S. dollar as the Fed announced they were scaling-back their bond-buying program, but what happened? The trend continued as usual. The point is that you can’t stop a freight train…there are very strong reasons why market’s trend, and one single news event is very unlikely to change the course of the trend. Thus, this is why I ignore the news except maybe to note when the volatile reports are coming out so that I can look for a nice entry in-line with the daily chart trend… 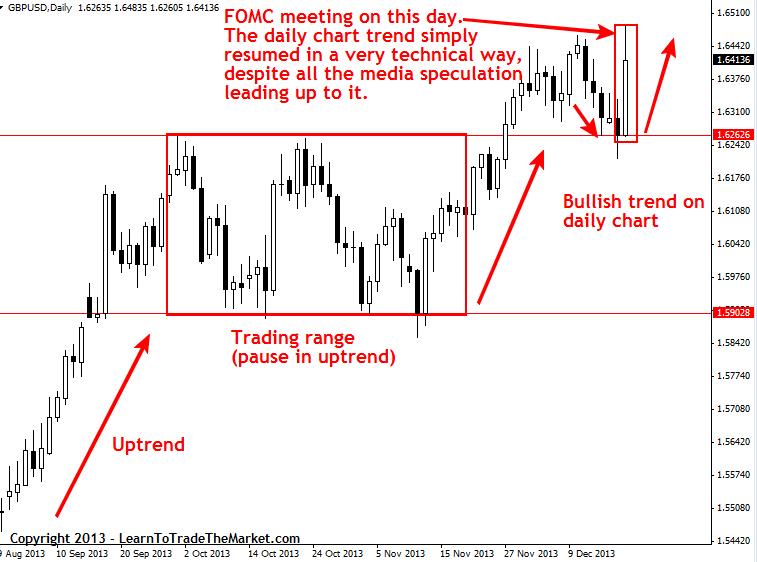 How important is economic news?

By trying to analyzing all the economic news variables that affect a market each day, you are probably going to stress yourself out, second-guess your ‘gut’ trading feel and generally cause confusion and frustration where it doesn’t need to exist. Many traders believe that all the economic data swirling about each day on their favorite financial news channel or on the internet is important, after all, if so many ‘experts’ are talking about these news events they must be important right? Not so fast. The financial news industry is a huge industry that employs thousands of people, but whether or not most of the actual economic data is useful or pertinent to you as a trader is a much different story.

As we discussed in the previous section, the price action in a market truly does give you all the information you need to know about that market. News reports and fundamentals are all absorbed into a market and reflected via its price action, so you really can stop reading economic reports and listening to news pundit’s “expert views” on the market…they simply don’t matter. If you want to start learning how to interpret and use the raw price action in the market , checkout my price action trading course for more information.