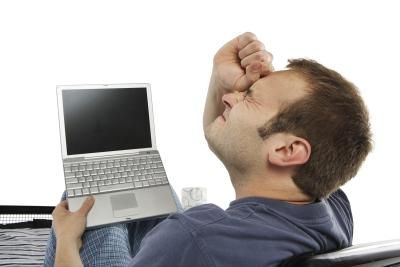 After completing our courses and tutorials, most traders have no problem reading the charts, and they can typically find good trades quite easily. However, there seems to be a big gap between being able to find good trades and being able to pull the trigger on them. The number one thing I find from talking to many beginning and frustrated traders is that they have a problem with simply executing the trade, not in finding it.

What is it that causes intelligent people who are accurate chart-readers and trade-finders to have such difficulty deciding to pull the trigger on a perfectly good trade?

Here is why you probably didn’t take that trade…

Often, a big reason why people don’t pull the trigger on perfectly good trades is that they simply lack confidence in their abilities. Traders, especially beginners, often think trading is much harder than it actually is. Thus, they second-guess themselves when looking at an obvious trade setup and instead of just executing the trade, they start questing it and questioning themselves, because it just ‘couldn’t be that easy, could it?’

Another reason why people have issues pulling the trigger on perfectly good trade setups is that when they move from fake money to real money, things can change. There’s emotion involved when you move to real money because something is on the line now. You know you could lose money you’ve worked hard to earn, this can play havoc with your trading mindset. Whereas, when you were demo trading with fake money, you probably were totally calm and took obvious trade setups with ease, with no second-guessing. Therefore, managing your risk to a dollar mount you’re comfortable with potentially losing per trade, is critically important when you start trading live, because you must remove as much emotion as possible to achieve that demo-trading mentality.

Then, there is the issue of “Murphy’s Law”, which means basically that anything that can go wrong, will go wrong. It goes something like this, you had some great calls / trades that you didn’t take and then another similar trade comes along and you trade it and it’s the one out of ten that results in a loss, then your confidence takes a huge hit and you get ‘gun shy’ on the next good trade, don’t take it, and it turns out to be a winner. This can obviously become a vicious cycle that can cause you to get frustrated and cause you to end up taking bad trades at some point, because you get so mad at all the good ones you missed you just finally jump in on a bad one, which results in more losses. It’s almost comical, if money wasn’t on the line.

There is also something I call hindsight addiction that affects one’s confidence in pulling the trigger on trades. Many traders don’t even realize it, but they’re addicted to their hindsight analysis. They become afraid to enter a trade without being able to see what happens next on the chart. This is a big reason why I am generally not a fan of back-testing, but I prefer forward-testing, or demo-trading in real time, to test your abilities before going live.

How to stop being afraid of good trades…

To rid yourself of the fear of pulling the trigger on a trade, you must remember that to make money in the market, you must take as many instances of your trading edge as you can, and over time, if that edge is profitable, it should pay off. This is an idea from the late-great Mark Douglas that I explain more in-depth in a recent article I wrote based on his teachings, read it here.

The idea is, you should be trading the trades you’re confident about as well as the ones you’re maybe even only 50% confident about. At the end of the day, how confident you are in a particular trade signal can vary greatly, depending on many variables, some of which even probably have nothing to do with the charts (how your day went, the state of your relationships, etc).

Now, that doesn’t mean go out and ‘spray bullets everywhere’. You should filter your trades, but don’t over-filter them; don’t convince yourself that there’s never a trade worth trading. You need to filter but not too much. Check out an article I wrote on how to filter good trades from bad.

The goal is to be confident about your trading edge and back yourself when it appears on the charts. You will need to think like a sniper, but not be afraid to pull the trigger.

Some steps you can take…

In the GBPJPY daily chart example below, there wasn’t anything to do through this giant period of data but once we got that pin we could read what happened; consolidation, false-break, confirmation (pin bar signal). We won’t go into detail here, but we saw a false-break signal on the GBPJPY, those who were short got caught short, and This pin was a signal and the short covering that followed, fueled the run higher. 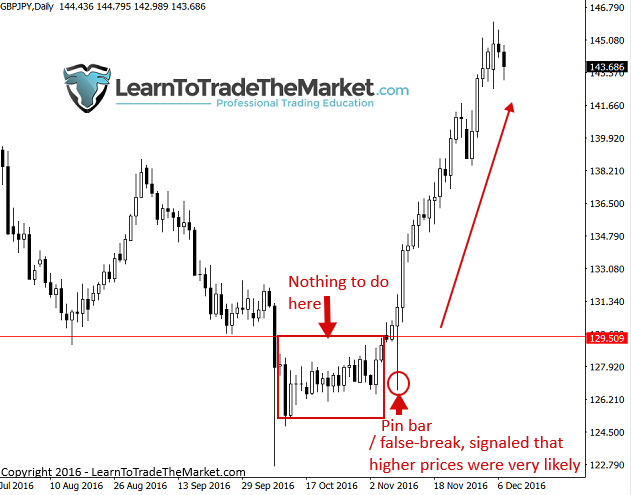 Price action analysis is not only about single bar signals, it’s about reading the charts and reading the ‘story’ the price action is telling you from left to right, much like the pages of a book. I dedicated an entire section of my professional trading course to this powerful concept and for many of my students this was  the ‘ah ha’ moment in their trading career. Glancing at a price chart, being able to read it like a language and confidently anticipate the markets next move is a skill all traders should aspire to.