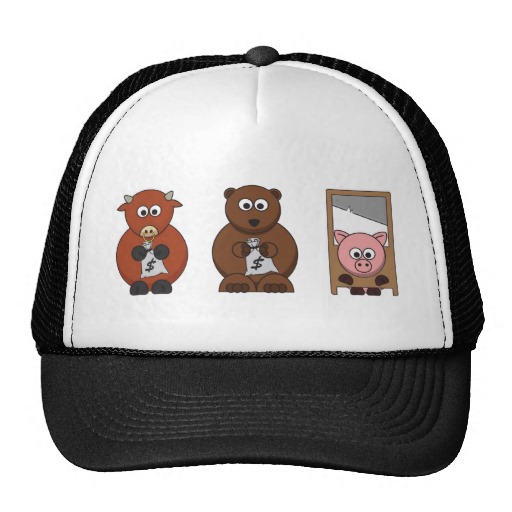 As the old Wall Street saying goes: “Bulls make money, bears make money, and pigs get slaughtered”. This saying warns traders and investors against excessive greed and impatience. Simple as it may seem on the surface, it conveys more than it may seem. Not letting greed affect your judgement in the market is much easier said than done.

Let’s discuss several ways the market punishes excessive greed, also known as ‘trading like a pig’, and some ways you can avoid being controlled by it. So, if you’d prefer to make money in the market, rather than get ‘slaughtered’ by it, read on…

Are you a bull, bear or pig?

Traders who have a bias on a market (bullish or bearish), and stick to that bias without over-trading (not being greedy), will typically make money over the long-run. Where many traders get into trouble is trading against the dominant market bias or trend. This is an especially easy trap to fall into if you don’t yet know how to identify a market’s trend. However, even traders who know how to identify a market’s trend still tend to trade against it far too often, this is called over-trading, or being a ‘pig’ in the market.

For example: If a market is in a clear trend, either up or down, you stick with trades ONLY in the direction of that trend and you ignore any potential counter-trend trades you think you see. You do this until that trend has clearly ended.

So, if a market has clearly been trending higher, you want to look only for price action trading signals that are buy signals, ideally from a confluent level in the market. If you try trading all the counter-trend retraces to the downside against a strong uptrend, you’re being a ‘pig’ and you’re going to lose money. Don’t be a pig, determine your bias for a market and remain patient while waiting for a signal in-line with that bias, and if no signals form in-line with that bias for a week or two, then you simply do not trade that market. Remember, not trading is ALWAYS better than losing money!

‘Pigs’ have unrealistic expectations about trading. They think they’re going to get rich quick. Whilst you might be lured into the temptation of ‘getting rich quick’ that many other trading sites and services advertise, I am telling you that it’s simply not possible. Actually, if you really believe you’re going to get rich quick in the market, I am going to do you a big favour and save you thousands of dollars by telling you to just stop now, stop reading this article and stop trading forever, you will be better off. Trying to ‘get rich quick’ will only make you poor, fast.

Don’t get me wrong, I’m not trying to turn you off to trading, I am just being honest with you since not too many other people in the trading world will be. Traders who don’t try to hit home runs every trade (not being greedy), will make money eventually. However, again, if you trade like a ‘pig’ by trying to make money on every little price fluctuation in the market, you’re going to become addicted to the market, emotional, and as a result, blow out your trading account.

If you miss a good trade setup, don’t ‘chase’ it. Just accept that you missed it and wait for the next opportunity. If you jump into a trade too late, you’re going to get a bad entry which means you’re going to need a wider stop loss and there’s a greater chance the market will move against you shortly after entering.

Chasing trades is also being greedy. You can’t successfully trade every move in the market, you just need to accept this. Trading is not about getting in on EVERY move, and it’s impossible to do this profitably anyways. All you need to do is hit one or two good moves a month and you can take a nice chunk of change out of the market. Trading a small account is difficult because even if you have one or two big pip gains per month, it’s not going to equate to a lot of money. However, money cannot be your main goal when you’re starting out with a small account. Learning to trade properly should be your main goal. If you do that, you will eventually make greater amounts of money. 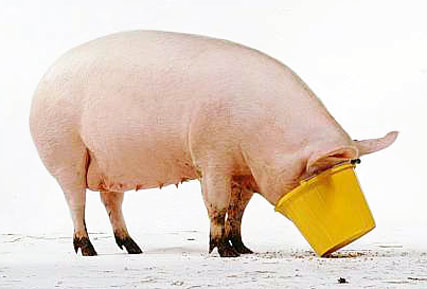 This one is pretty self-explanatory and obvious. But, it needs to be mentioned since we are talking about being greedy and trading like a ‘pig’. Quite simply, if you risk more than you are comfortable with losing on any one trade, you’re trading like a pig and you are eventually going to suffer an uncomfortably large loss which will set you on a course to blowing out your trading account.

Risking more than you can really afford to lose is the clearest example of trading like a pig. If you cannot at least muster the discipline to tune your risk per trade to a level that you’re emotionally comfortable with, you will not make it as a trader. The ‘barometer’ for being ‘emotionally comfortable’ with your risk on a trade, is whether or not you can sleep well at night with a trade on. If you find that you can’t sleep properly and you’re constantly looking at your trade on your cell phone while lying in bed when you should be sleeping, you need to dial-down your risk until you can easily sleep at night without thinking about your trade. Traders who practice proper risk management every trade (not being greedy), will make money

As you can see, greed kills, it can kill a trader’s returns by making them act in haste. The best trader is the one who is intellectually flexible and dispassionate in analysis when it comes to trading. As Warren Buffet has said “the critical determinant in an investor’s success is not intelligence or skill but temperament.”

In other words, if you trade like a pig, you’re not going to succeed as a trader. You can learn more about how to trade like a bull and a bear by learning some of the simple price action strategies which I teach in my members’ area and price action trading course. Hopefully, by doing so, you’ll learn to develop a market bias, stick with it, and stop losing money by trading like a pig.