Nial Fuller is a professional trader, author & coach who is considered ‘The Authority’ on Price Action Trading. In 2016, Nial won the Million Dollar Trader Competition. He has a monthly readership of 250,000 traders and has taught over 20,000 students. Read More…

GBPJPY Pair Inside Bar Coil Pattern- Which Way will it beak?

On Wall Street today stocks closed lower after a surprising drop in home construction and a disappointing forecast from technology companies fueled worries that the economic recovery may be slowing.

This slight drop came one day after major stock indicators closed at 13-month highs. The Dow closed down 11 points after rising 9 of the past 11 days. Some market analysts are saying the market has been overdue for a pullback after the unusually fast climb.

In currencies, the dollar fell against most of the majors on Wednesday as traders took profits on the currency’s biggest rise in three weeks. New data out today did little to alter the view that U.S. interest rates will remain at record lows well into next year. The U.S. dollar may continue to weaken further, as forex traders feel the dollar is a risky bet right now given the current economic outlook. If today’s trend continues the dollar could be in for a bumpy rest of the week as the dollar sell-off may hit full force.

The daily chart of gbp/jpy is showing coiling inside bars over the last 4 trading days. Typically a tight coil like this results in a violent break out. Note that it could break up or down, the prevailing trend is down so this is the expectation. 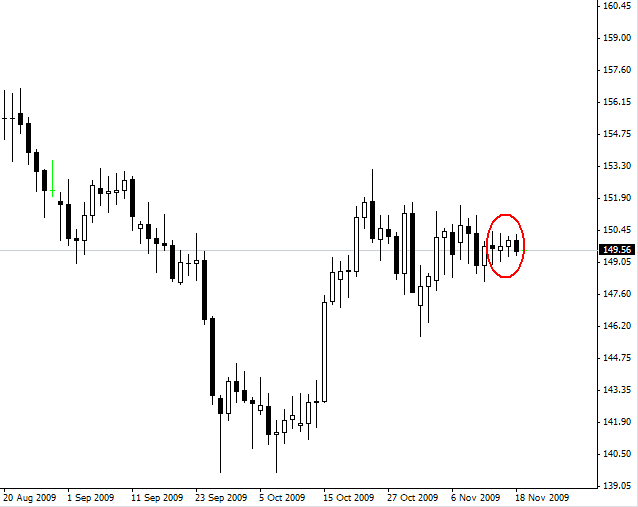 4:30 am EST: British retail sales. This report can lead to volatile market reactions in the forex as retail sales are the primary gauge of consumer spending which accounts for the majority of overall economic activity.

Nial Fuller is a Professional Trader & Author who is considered ‘The Authority’ on Price Action Trading. He has a monthly readership of 250,000+ traders and has taught 20,000+ students since 2008. In 2016, Nial won the Million Dollar Trader Competition. Checkout Nial's Professional Trading Course here.